Patient BR, a 38-year-old female, underwent LASIK surgery in October 1999 for correction of her ­6.50D myopia OU. On the right eye, the improperly-seated microkeratome blade resulted in a deep 370 micron flap. (Normal flap thickness is approximately 140 to 160 microns.) Laser surgery in progress on the right eye was aborted when aqueous was observed seeping through the cornea. LASIK surgery was never performed on the left eye. 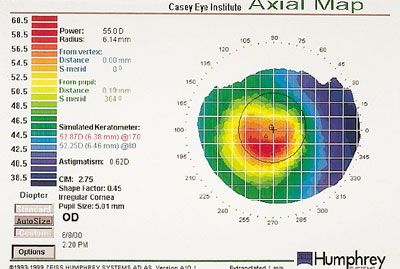 Scheinpflug photography showed a focal area of thinning in the right eye just temporal to the central cornea (Figures 2 and 3). Slit lamp examination revealed fine microstriae inferiorly, and a faint, linear stromal haze extended from the posterior to the anterior stroma in a radiating fashion (Figure 4).

We attempted numerous RGP diagnostic lenses on the patient's right eye to lessen her symptoms of intense glare, halos and monocular diplopia. However, traditional RGP lens designs failed to center adequately and were quite uncomfortable.

We eventually fitted the patient with the RGP MacroLens (C&H Contact Lens), base curve 6.75mm, power ­11.25D, diameter 14.2mm (Figure 5). For the past six months, she has reported excellent lens comfort with a wearing time of 12 to 14 hours a day and a best corrected VA of 20/60.

Due to the status of the anterior topography and many intracorneal changes, the patient will eventually require a corneal transplant. However, the MacroLens has allowed her to function by dramatically lessening her symptoms of glare, multiple images and severe headaches.