In some patients, Acuvue 2 (Vistakon) contact lenses with the 8.3mm base curve demonstrate minimal to no lens movement during routine slit lamp blink observations. But these lenses usually move freely during the Josephson eyelid push-up test.

We conducted a study to identify the percentage of patients, probable identifying characteristics and follow-up fitting success associated with Acuvue 2 8.3mm base curve lenses that move freely on the eyelid push-up test but show minimal to no movement on slit lamp blink observations. 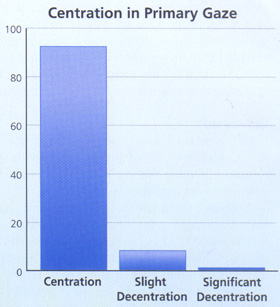 Investigators fit Acuvue 2 8.3mm base curve contact lenses on 223 consecutive, current contact lenses wearers in five different offices in two states. The study patients had previously worn lenses from the major manufacturers in all wearing modalities. We recorded centration (Figure 1), movement with blink (Figure 2) and eyelid push-up movement (Figure 3). We observed centration and blink movement in both forward and upward gaze. We identified patients who had acceptable movement on slit lamp and dispensed them one pair of 8.3mm base curve Acuvue 2 contact lenses. We dispensed boxes at one week unless a patient demonstrated any problems.

The profile for the study patients was as follows:

At one week and one month, 222 of 223 patients were successfully wearing 8.3mm base curve Acuvue 2 lenses. Slit lamp observations demonstrated acceptable movement as well as healthy ocular structures. The only study dropout demonstrated good movement but felt that her previous lenses (Acuvue 2, 8.7mm base curve) were more comfortable. 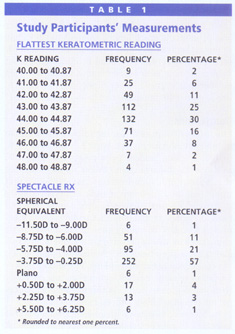 Practitioners may make the misinterpreted observation with the 8.3mm base curve Acuvue 2 and other similar contact lens designs that a lens which demonstrates little to no movement on the blink is a less-than-optimal, tight-fitting lens.

Practitioners need to revisit what role keratometry should play in base curve selection for soft contact lenses. We've found through our experience that peripheral corneal curvatures influence the fit and centration of the Acuvue 2 lens more than the central 3mm measured by the keratometer. As this study illustrates, the 8.3mm base curve was successful across the keratometry range. Arbitrarily picking keratometry readings to make a base curve selection isn't a sound principle when using today's contact lens designs. If we applied 20-year-old glaucoma therapy treatments to today's medications, we'd find ourselves in a precarious position. Yet we continue to apply hard lens principles dating from the 1960s and 1970s to new millennium soft contact lens designs.

Edge and curvature lens design enhancements can cause confusion during slit lamp observations. Current lens designs don't interact with patients' eyelids to the extent that previous designs did. Earlier designs demonstrated significant interaction with the eyelids, so lens movement with the blink was a valid characteristic in determining base curve selection.

GPC, allergies, dry eye and comfort issues have resulted in better lens designs that minimize this mechanical interaction. During normal blink observations, this minimal interaction between the eyelid and the lens may generate a false-positive indication of a tight lens. But it's important to understand newer design characteristics and lens interactions with the ocular structures. Does the Acuvue 2 8.3mm base curve lens demonstrate minimal blink movement because it's tight or because of minimal lid interaction?

We've found that currently the best way to determine if a lens moves adequately isn't by blink movement but by using the Josephson push-up test. We talked with practitioners as well as with industry representatives who all consistently stated that approximately 15 percent of 8.3mm base curve Acuvue 2 wearers demonstrated little or no lens movement during blinks. Our results concurred, with approximately 13 percent of study patients demonstrating minimal or no movement during blinks. Yet 100 percent of our study patients showed adequate lens movement during the push-up test, and only one patient dropped out because of comfort issues.

"Steeper" base curves in today's lenses provide the best centration, improve comfort and minimize eyelid interaction and tear film disruption. We want these positive characteristics for all of our contact lens patients. As practitioners, we need to stop using arbitrary keratometry and spectacle parameters for base curve selection. We need to understand what we're observing with our slit lamps. Lastly, we must not become stagnant in our fitting skills as they relate to new millennium contact lens designs.

Our study determined that significantly more than 97 percent of patients can wear 8.3mm base curve Acuvue 2 lenses (student t-test p=0.0128). This level of successful dispensing and follow up indicates that the lenses don't demonstrate characteristics that would indicate a tight lens or tight lens syndrome.

Neither keratometric readings nor spectacle prescriptions reliably indicate appropriate base curve selection. We need to re-evaluate these arbitrary parameters in all of our offices. Here's why: