This article presents our fourth annual survey of international contact lens prescribing trends. In 2004, we analyzed prescribing habits in 14 countries: Australia, Belgium, Canada, Germany, Greece, Italy, Japan, the Netherlands, New Zealand, Norway, Singapore, Sweden, the United Kingdom and the United States. To each, we sent 1,000 surveys (or a pro-rata number in countries with less than 1,000 practitioners) to clinicians randomly selected from appropriate national registers.

The surveys elicited prospective information about contact lenses and care products that respondents prescribed to up to 10 patients fit after the study began. We employed a weighting system to better reflect the trends of busier practices.

The proportion of women within the fitting groups was remarkably consistent, with representation between 61 percent in Norway and 69 percent in Singapore. In most countries, respondents described a majority of patients as "refits" (patients who presented as existing wearers) rather than new fits, and practitioners fit 90 percent of patients for "full time" wear (four or more days each week).

Since the first silicone hydrogel lens launched in 1999, an eagerly awaited market statistic has been the proportion of extended wear fits within a contact lens population (Table 2). In almost all countries, the proportion of extended wear refits exceeded that of new fits, presumably because practitioners exercise a greater level of caution when fitting a non-lens wearer with extended wear than when prescribing this modality to an existing wearer (Figure 1). Considerable differences existed among markets in prescribing extended wear. With the exception of Japan (where extended wear silicone hydrogels aren't currently approved for sale), the Netherlands showed the lowest rate of extended wear prescribing at only three percent of soft lens refits. On the other hand, its northern European neighbor, Norway, indicated 27 percent of refits into extended wear. Australia, Canada, New Zealand, Sweden, the United Kingdom and the United States were other countries that prescribed more than 10 percent of soft lens refits as extended wear. Figure 2 indicates how these proportions have changed in recent times for a representative subset of countries.

An important change in the market since the previous report in 2003 was the launch of a silicone hydrogel material that is specifically indicated for daily wear. During the timeframe of this survey, only the United States had such a product, and this appears to have resulted in an increase in the proportion of all daily wear silicone hydrogel lens fits from four percent in 2003 to 13 percent in 2004 (Figure 3).

Although silicone hydrogel lens use has increased in recent times, 97 percent of all soft lens fits in this survey were with other ("conventional") hydrogel materials. Fitting low-water content lenses (<40 percent) is uncommon except in Greece, Japan and Singapore. Mid-water lenses (40 percent to 60 percent) account for two-thirds of all soft lenses prescribed, although high-water lenses are the most common choice in Belgium and the United Kingdom.

Soft toric lens prescribing is remarkably consistent worldwide and typically ranges from 30 percent to 39 percent of new soft daily wear fits, although this figures is much lower in Japan (11 percent).

An area in which great variation exists among markets is the replacement intervals for prescribed soft lenses. For new daily wear fits, for example, the proportion of daily disposable fits varied from six percent or less in the United States, Belgium and the Netherlands to 36 percent or more in Japan, Norway, Singapore and the United Kingdom (Figure 4). For re-useable new soft daily wear lenses, respondents most commonly prescribed monthly replacement in all countries except for Italy and Japan, where one- to two-week replacement is the most popular. Lenses with no planned replacement interval accounted for only three percent of these fits.

With the exception of Italy and Greece, where low-Dk GP lenses (<40 barrers) were the most commonly prescribed, and Japan where high-Dk GP lenses (>90 barrers) were most popular, surveyed practitioners most frequently prescribed mid-Dk GP materials (Table 3). The proportion of GP lenses prescribed on a planned basis varied considerably among the countries studied. As a rule, countries that prescribe a high proportion of daily disposable soft lenses are more likely to fit planned replacement GP lenses. For example, respondents prescribed 67 percent or more of new GP lens daily wear fits on a planned replacement basis in Norway, Sweden and the United Kingdom, although we should temper the result for Norway in particular with the caveat that the total number of GP fits in that country is small.

For the first time, we offered the category of "orthokeratology" on the survey forms, and this mode of contact lens fitting appears to have received some degree of popularity (>five percent of GP lens fits) in Australia, Italy, the Netherlands, Sweden and the United States (although a number of countries reported no orthokeratology fits).

This article confirms the significant differences in contact lens prescribing habits among countries around the world. As a good example, the differences among the northern European markets highlight the significance of local educational and lens supply factors in determining the nature of national contact lens markets, if we assume that these countries, which are geographically close, have similar national characteristics in terms of wealth, desire for convenience, requirements for cosmesis and other factors.

So what can we expect for this year? The main points to watch for in 2005 are: 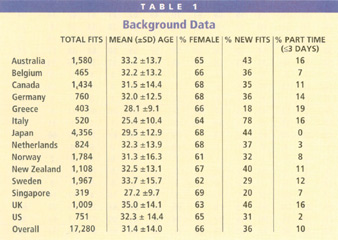 To obtain references, please visit www.clspectrum.com/references.asp and click on document #111.

Dr. Morgan is the research manager of Eurolens Research at the University of Manchester, UK.

Dr. Efron is a professor of Clinical Optometry and is director of Eurolens Research at The University of Manchester, UK.

Dr. Jones is the clinic director and head of the Pediatric and Special Needs Clinic at the School of Optometry, University of Waterloo, Waterloo, Canada.

Dr. Grein is a professor of Optometry at the University of Applied Sciences, Jena, Germany.

Dr. Montani is an optometrist consultant, University of Pisa and is a consultant, Formazione Continua in Medicina, Italy.

Dr. Itoi is an associate professor in the Department of Ophthalmology at Juntendo University, Tokyo, Japan.

Dr. Phillips is the clinic director of the Department of Optometry and Vision Science at Auckland University, Auckland, New Zealand.

Dr. Helland is an associate professor at the Department of Optometry and Visual Science at Buskerud University College, Kongsberg, Norway.

Ms. Yeo is a lecturer at Singapore Polytechnic, Singapore

Dr. Barr is editor of Contact Lens Spectrum magazine. He's a professor and associate dean for clinical services and professional program at The Ohio State University College of Optometry.