As an optometry student in the mid-1970s I had heard of Dr. Bailey but would not meet him until a few years later. When I received my first issue of Contact Lens Forum as a fourth year optometry student who was keenly interested in contact lenses, I was most awed by his presence as the editor. I would soon read every word of every issue as the years went by.

In the spring of 1944, Neal and his devoted wife, Flo, stood before an Army major as he was once again rejected for military service, but this time for a different reason. He was working at a steel foundry vital to the defense industry and President Roosevelt couldn't draft him for duty elsewhere according to a new edict. The first time that he volunteered for duty was October 1941. After spending the day without clothing while being processed in a drafty recruitment center, he was told that he was 4F: Poor Vision. He had quite a bit of astigmatism.

This experience was one of many reasons why he was eager to attend Ohio State University in the fall of 1944. After receiving his BS in Optometry summa cum laude in 1947, he practiced in Escanaba, Michigan, until he returned to OSU. Back at OSU he earned his PhD in Physiological Optics in 1954 with the renowned vision scientist Glenn Fry as his mentor. He taught at Indiana University, became a close friend of Irv Borish, OD, from Kokomo, Ind., and created a contact lens teaching facility at IU. In 1958 he returned to Columbus to private practice at 15th and High Streets near the OSU campus and to make and document contact lens history. 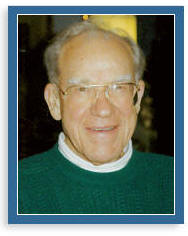 That's where I really got to know him well. Neal was a precise, organized and uncompromising optometrist and businessman, yet he was one of the most comfortable people to be with you would ever meet. Neal called it like he saw it. He didn't have an instrument or device in his office that he hadn't either made by hand or modified to make it better.

I worked in his office part time in the late 1970s. His records and letters were thorough and ahead of their time. His lab and his contact lens technician could make a perfect finished lens from an uncut in about 10 minutes and he could take a lens and put grooves or channels in it or double truncate it with exactness and efficiency. His early soft lenses all were etched with a diamond to make sure they were identifiable. He hated it when you dropped a contact lens. Saturday mornings he'd see about 20 patients, half of which were keratoconic or aphakic. He'd get frustrated but was relentless in his excellence. Flo was his office manager and ever-present travel companion.

At optometric meetings, he always sat in the front row, took pictures, made tapes and asked the good questions to clarify the complex information. He was also an adjunct clinical associate professor at OSU before Irv Bennett, OD, suggested that he become the first Editor of Contact Len Forum in May 1976. He later started Contact Lens Spectrum in January 1986, a journal that later absorbed the former Contact Lens Forum as well.

Neal always made sure to deal with misleading issues head on. For example, in the early years of the belief that contact lenses corrected all astigmatism, he published on residual astigmatism. In the early days of thinking that PMMA lenses stabilized myopia progression, he explained the many ways that contact lenses were typically over-minused. Later with Richard Hill, OD, PhD, he showed how fenestrated PMMA lenses really didn't do much to improve corneal oxygenation and that soft contact lenses really did accumulate deposits.

Two of my favorite Neal Bailey quotes are "we've known that for years" and, when someone would disagree with something he or someone else said in Contact Lens Spectrum he would say, "Well then, I think you should send us a letter or article about that." Neal always thought there were many versions of the truth about contact lenses and wanted to make sure everyone knew them. Two of his more famous quotes were "silicone contact lenses are the lens of the future and always will be," and his definition of the holecon contact lens — a 9mm lens with a 10mm central fenestration.

I'm so grateful he and Larry Henry decided I should follow him as the editor of Contact Lens Spectrum and that he spent all those hours with me explaining how to do this. He was one of the best writers I've ever met.

He authored more than 120 articles and chapters on contact lenses and practice management and was one of the clinical investigators of the soft contact lens in the United States. Neal was always brutally honest about contact lenses, their manufacturers, colleagues and the economics of optometry, eye health and the contact lens industry. Thus, many in the field trusted him and sought his counsel and advice. He was a great historian.

He is our college's major benefactor. He honored Dr. Glenn Fry by supporting a professorship as well as the Neal J. and Florence E. Bailey Endowed Scholarship to Optometry established in 1995. He bequeathed his home and office in a charitable remainder unitrust to the university when he officially retired for the last time in 1996.

In his final years after Flo died and he moved from Columbus, he lived with his loving daughter Nancy in Laredo, Texas.

We miss you Neal.