As the number of designs and parameter ranges for soft toric contact lenses has increased and their clinical performance has improved, their prescribing rate has correspondingly multiplied. It's now more in line with the prevalence of astigmatism in the general population, accounting for 20 percent of new soft disposable lens fits worldwide and for more than 30 percent in the United States. This suggests that many practitioners are satisfied with the performance of currently available soft toric lenses.

Subjects were fit with a pair of toric lenses and objective and subjective evaluations were carried out at baseline, on dispensing and after two weeks of daily wear for each pair of lenses. Investigators conducted follow-up visits at two, four and six weeks. All follow-up visits were scheduled after six hours of lens wear.

We recorded subjective lens preference at the final six-week visit in a forced choice method to select the most comfortable lens, the lens that provided the best vision, and the best overall lens based on subjective preference. All subjects used Opti-Free Replenish (Alcon) multipurpose disinfecting solution.

Inclusion criteria included existing lens wearers who experienced ocular dryness or discomfort with current lenses. Investigators asked candidates whether they experienced dryness or discomfort with their lenses some time during the wearing schedule at the baseline visit. Only subjects that responded positively to the dryness and discomfort question were included in this experimental design. We included subjects who had refractive errors between –1.00D and –6.00D of myopia, with at least 0.75DC in both eyes but no greater than 1.50DC and cylinder axes ranging between 180 ±20 degrees and 90 ±20 degrees because of limited parameter availability for one of the tested lens designs at the time of the study. 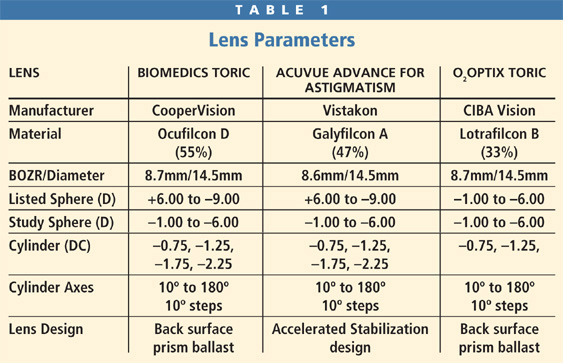 The descriptive breakdown of subjects revealed that 86 percent were caucasian, 4 percent African-American, 8 percent Hispanic and 2 percent Native American. Sixty-one percent were female and 39 percent male. The mean age was 38 years (±1.5 years, standard error of the mean). Sixteen percent of the subjects were smokers.

Baseline Outcomes All subjects subjectively expressed symptoms of dryness or discomfort with their habitual lenses at the baseline visit. Eighty-four percent reported dryness after two hours of contact lens wear, 20 percent had received a dry eye diagnosis from their practitioner and 46 percent thought they had dry eyes. Figure 1 summarizes symptoms with subjects' habitual contact lenses, with 94 percent reporting dryness, grittiness or burning sensation on a subjective questionnaire.

Comparative Test Lens Outcomes Evaluation of vision quality, comfort and handling at the dispensing and two-week follow-up visits (Figure 3) demonstrated that on dispensing, the Biomedics Toric and the O2Optix Toric were rated significantly higher than Acuvue Advance for Astigmatism for vision quality (P<0.01) and handling (P<0.0001). There were no statistically significant differences between the Biomedics Toric and O2Optix Toric for these variables. There were no statistically significant differences in comfort among any of the three toric designs at the dispensing visit. 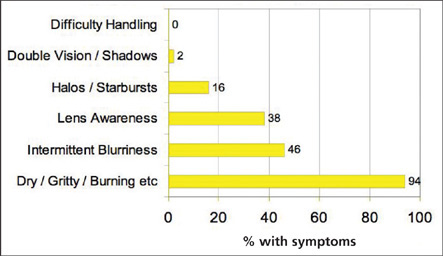 Figure 2. Vision quality, comfort and handling on dispensing and after two weeks DW.

Despite differences in subjective vision quality, there were no significant differences in Snellen visual acuity between lenses (corrected mean VA range 0.94 and 0.98 with Acuvue Advance for Astigmatism to 1.0 with Biomedics Toric and O2Optix Toric).

Subjective Symptoms at the Follow-up Visits Symptoms were recorded after subjects wore each test lens for two weeks. We conducted all follow-up visits after at least six hours of lens wear. There were no significant differences in average wearing time among the three soft toric lenses. Mean values were 13.4 hours, 12.9 hours and 14.1 hours for Biomedics Toric, Acuvue Advance for Astigmatism and O2Optix Toric respectively. There were no significant differences between Biomedics Toric and O2Optix Toric for any measured subjective symptoms.

Lens Fit Characteristics In terms of lens centration (Table 2), Biomedics Toric displaced inferiorly significantly less frequently than did Acuvue Advance for Astigmatism or O2Optix Toric (P<0.01). One-third of Acuvue Advance for Astigmatism lenses displaced inferiorly compared to one-tenth of Biomedics Torics or one-fifth of O2Optix Torics (P<0.01). None of the lenses displaced nasally. We determined the significance by Chi Square test, which determines whether displacement is more than expected based on average combined displacement for all three groups.

Lens rotation analysis revealed that there were significant differences in the proportion of lenses rotating among groups (Table 3). A significantly lower proportion of O2Optix Torics rotated temporal in the right eye compared to Biomedics Torics or Acuvue Advance for Astigmatism lenses (P<0.05). A lower proportion of Biomedics Torics and O2Optix Torics showed nasal rotation in the left eye than did Acuvue Advance for Astigmatism lenses (P<0.01). Lens rotation grades were low, ranging from 1.00 to 1.63 (where 1 = 5 degrees to 10 degrees and 2 = 10 degrees to 15 degrees), with no significant differences between rotation degree grades among lenses.

Figure 3. Forced Choice responses at the end of the six-week study.

There were no significant differences among lenses for any other slit lamp findings.

Forced Choice Outcomes At the final follow-up visit, subjects responded to a forced choice decision. When presented with a forced choice for the best performance in terms of comfort, vision clarity and overall best lens, Acuvue Advance for Astigmatism was the least preferred of the three designs evaluated (P<0.05). There were no statistically significant differences in preference between Biomedics Toric and O2Optix Toric. O2Optix Toric ranked highest most often in all categories, with Biomedics Toric a close second.

All of the lenses tested demonstrated good overall fit characteristics, although a higher proportion of Acuvue Advance for Astigmatism lenses decentered inferiorly. Although there were differences in rotation among lenses, all grades were small and could be considered clinically insignificant. All lenses utilize contemporary toric designs, and their rotational stability performance was good with all three lens designs. Although the most frequently observed corneal staining was inferior, there were only statistically significant differences among designs in terms of superior staining (less with Biomedics Toric and O2Optix Toric vs. Acuvue Advance for Astigmatism).

Since its launch in 2001, we believe Biomedics Toric has provided consistent high quality vision, rotational stability and comfort for astigmats. It was an ideal choice to compare the clinical performance of a hydrogel toric with two silicone hydrogel toric lenses.

Certain manufacturers of silicone hydrogel lenses have specifically promoted these lenses for managing dry eye symptoms associated with lens wear. Practitioners know from experience that a successful lens must meet the criteria of clear and stable vision, sustained comfort throughout lens wear, good physical handling characteristics and, finally, appropriate physiological eye health response to lens wear. Differences in clinical performance of the torics evaluated in this investigation did not appear to be affected solely by Dk/t, suggesting that success with soft toric lenses is influenced by criteria other than Dk/t.

Critical performance characteristics for acceptable and continued lens wear include good, consistent visual performance, high comfort levels and minimal dryness symptoms. A successful toric lens should meet these performance characteristics (which the Biomedics Toric hydrogel lens achieved with the current wearers who had dryness symptoms) in addition to ensuring a healthy physiological response.

Longer studies can assess whether Dk/t increases with silicone hydrogel torics will result in improved physiological response over longer periods. Until then, we believe you can obtain excellent performance for astigmats with Biomedics Toric hydrogel lenses, which we found perform as well, or better than, Acuvue Advance for Astigmatism and O2Optix Toric two-week silicone hydrogel lenses. CLS

The study, conducted by EyeVis Eye and Vision Research Institute in Oaklawn, IL, was funded by a research grant from CooperVision.

For references, please visit www.clspectrum.com/references.asp and click on document #147.