Our annual review of international prescribing trends reports on close to 20,000 prospectively conducted fits in 27 countries.

We've reported the results of our international survey of contact lens prescribing each year in this journal since 2002, and our analysis for 2007 represents our most wide-ranging study to date. In this article, we report on the outcomes of 19,971 contact lens fits performed in 27 countries. As in all previous years, the study was prospective in that we asked practitioners to provide information about their first 10 patients prescribed with contact lenses after they received paper or electronic survey forms. One thousand practitioners were approached in most countries, with a smaller number of questionnaires sent in markets where the total number of contact lens practitioners was fewer than this.

The precise composition of the practitioner cohort (the proportion of ophthalmologists, optometrists and opticians) necessarily varied by country, but we chose a randomized selection of those practitioners licensed to fit contact lenses in each case.

In all countries, most patients were female (ranging from 56 percent in Greece and Kuwait to 75 percent in Hong Kong) and the average age at fitting was 30.4 years (from 26.4 years in Croatia to 35 years in New Zealand). Data in Table 1 suggest that fitting older patients is more commonplace in the developed markets. Australia, Canada, Germany, the Netherlands, the United Kingdom and the United States all have mean fitting ages of about 33 years or older, compared to younger patients in the developing markets of the world, particularly in east Asia, eastern Europe and the Middle East (the mean age is under 29 years for Bulgaria, China, Croatia, Hungary, Lithuania, Romania, Russia, Jordan and Kuwait). 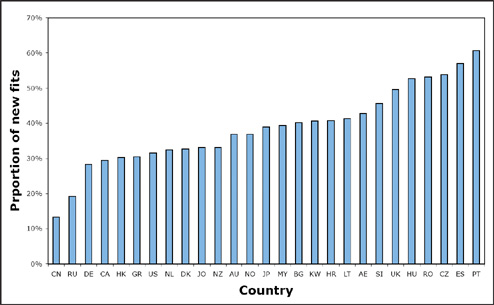 Figure 1. The proportion of contact lens fits reported as 'new fits' (patients who have not previously worn contact lenses or those who have spent a considerable time out of lenses). 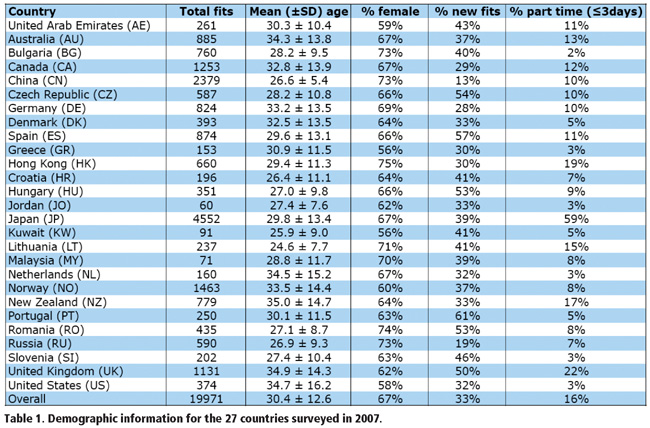 Figure 1 shows the proportion of new fits around the world, from China where only 13 percent of fits were described as new, to Portugal with 61 percent. In 21 of the 27 surveyed countries, refits were more common than new fits.

Soft lenses account for more than 90 percent of fits worldwide; they represent 95 percent or more of fits in nine of the 27 countries evaluated and all reported lens fits in China, Kuwait and Lithuania. This year saw a similar rate to previous years of GP lens prescribing at 9 percent of all fits, including 1 percent for orthokeratology (Table 2). This latter modality was reported at 4 percent of fits or greater for Australia, Hong Kong, Malaysia and the Netherlands. Interestingly, the reasons for this modality's popularity appear to be different depending on the market. Ortho-k is presumably popular in Hong Kong because of the high prevalence of myopia. The Netherlands is home to a number of important ortho-k innovations, and practitioners in this country have a history of greater GP fitting. Orthokeratology may be popular in Australia because of the significant amount of research in the field conducted in that country. 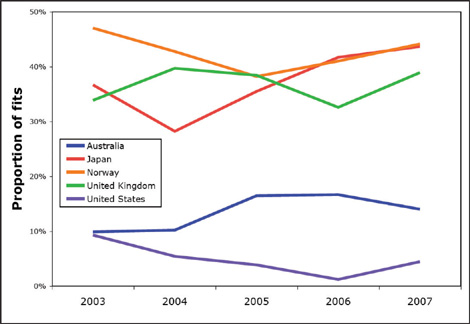 Figure 2. The proportion of daily disposable lenses prescribed as new soft lens fits from 2003 to 2007.

2007 saw a continuation of the recent trend for GP lenses to be used for more complex fittings (Table 3), particularly in countries where the overall use of GP lenses was low. For example, in the Czech Republic, GP lenses accounted for only 3 percent of all fits and a majority of these were toric lenses. In Spain, about one-third of new GP lenses prescribed were multifocals. You can see a similar trend for orthokeratology lenses. In Australia and Hong Kong, for example, about half of all GP lenses prescribed were for orthokeratology. 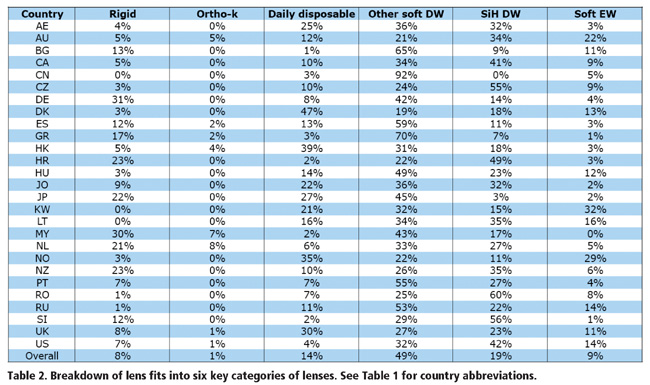 The only market with a significant fitting rate of 'non-orthokeratology' extended wear GP lenses was Norway, where about one in four rigid lens fits was for extended wear. This country has a small proportion of GP lens fitting overall and a very high number of extended wear fits for soft lenses.

GP lens planned replacement accounts for about one-third of all fits, although significant variation exists in this proportion among the markets — this value is generally higher in countries where the number of GP lens fits is relatively small.

The use of silicone hydrogels for soft lens fitting continues its recent popularity; these materials now account for more than half of soft lens new fits in the Czech Republic, Lithuania, Romania and the United States (Table 4). These findings suggest that these materials have been particularly well received in some of the world's developing markets. If we restrict analysis to daily wear spherical lenses only (on the basis that some markets do not have silicone hydrogel torics or multifocals), 29 percent of new soft lens fits are with silicone hydrogels. This is a remarkable figure given that the use of this material for daily wear was close to zero in 2004. 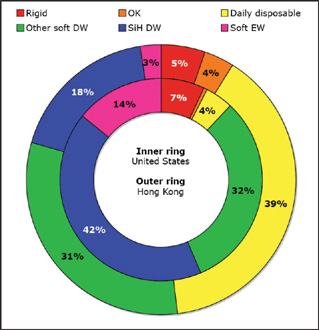 Figure 3. A comparison of contact lens prescribing in Hong Kong and the United States.

Toric soft lens fitting was very high (35 percent or greater of new fits) in Germany, Denmark, Spain, Hong Kong, New Zealand, Portugal and the United Kingdom and was low (less than 15 percent of new fits) in Bulgaria, China, Japan, Lithuania and Russia. Cosmetically tinted lenses were prescribed for 3 percent of new soft fits worldwide, reaching more than 10 percent of fits in Romania and Russia. Monovision/multifocal fitting accounted for only 6 percent of fits, with the highest number of fits in Germany (20 percent) and the United States (18 percent).

As in previous years, daily disposable lenses are the most successful in Scandinavia, accounting for 63 percent and 57 percent of new soft daily wear fits in Norway and Denmark, respectively. If we restrict this analysis to spherical lenses only, these values increase to astonishing levels: 84 percent and 81 percent, respectively. Daily disposables are also commonly prescribed in the Middle East countries represented in this survey. The proportion of daily disposable lenses prescribed as new daily wear fits in Jordan, Kuwait and the United Arab Emirates varies between 23 percent and 62 percent, among the highest of the markets assessed.

Extended wear soft lenses accounted for about 10 percent of new fits and refits, which is similar to previous years. The only markets with levels of extended wear prescribing significantly greater than this world average are Norway with 30 percent of soft lens fits and Australia with 24 percent of fits. CLS

For references, please visit http://www.clspectrum.com/references.asp and click on document #146.