A review of current instrumentation and contact lens options designed for the pursuit of superior vision.

By Kenneth A. Lebow, OD, FAAO

Wavefront technology has dramatically changed the way we look at refractive analysis and contact lens fitting. Our original refractive concerns were limited to simply computing the spherical, cylindrical and axis requirements of a patient's prescription. While these components still remain critical elements of the eye examination, they are now designated as defocus (either myopic or hyperopic) or tilt (astigmatism) and together are referred to as lower-order aberrations (LOAs). LOAs represent the majority of the wavefront error in the human eye.

Of particular interest with wavefront analysis are new terms that describe various aberrations of the visual system such as spherical aberration, coma, trefoil, quadrafoil and others that collectively describe higher-order aberrations (HOAs).

The obvious goal of wavefront technology is to correct both LOAs and HOAs in an attempt to achieve an ideal correction that produces ‘super vision.’ To this end, wavefront-guided refractive surgery, aberration-correcting intraocular lenses, adaptive spectacle lens optics and aberration-controlling contact lenses all represent attempts to provide patients with higher quality vision.

Various devices have been developed to measure HOAs. One of the more common methods of aberration measurement uses Shack-Hartmann wavefront technology, which was originally designed for astronomical studies and was later applied to measuring ocular aberrations. Other types of aberration measurement such as ray tracing, scanning slit refractometry, dynamic skiometry and other more subjective methods have improved our ability to measure, detect and understand the influence and effect that HOAs have on the human ocular system. Following are several types of aberrometers and their description technology:

• Shack-Hartmann Aberrometer – reflection aberrometry in which light exiting the eye is collected at the entrance pupil and the wavefront error is reconstructed after passing through a lenslet array. This may be of limited value in patients who have abnormally high magnitudes of aberrations because of distorted patterns and the large displacement between the spot image and the corresponding lenslet axis.

• Tscherning Aberrometer – ray tracing device that measures the wavefront aberration in the image plane and uses retinal imaging to photograph the patient's actual retinal image, incorporating the visual distortion to facilitate diagnosis of conditions. The Tracey Aberrometer (Tracey Technologies, Corp.) is another example of a ray tracing device.

• Nidek OPD-Scan Aberrometer – this device uses retinoscopic double pass aberrometry and differs from other aberrometers in that it measures the time that light takes to reach photo detectors after reflecting off of the retina and passing through the optical system. Other methods attempt to determine the position of points passing through the optical system and are projected onto a lenslet array (or a disc of tiny lenses). By using a time-based analysis (versus a position-based analysis), this instrument has a broader dynamic range of measurement, higher resolution and increased accuracy. Clinically this is similar to dynamic retinoscopy.

• Emory Vision InterWave Aberrometer – spatially resolved refractometry based on the Scheiner principle, which allows patients to interact during the testing process. 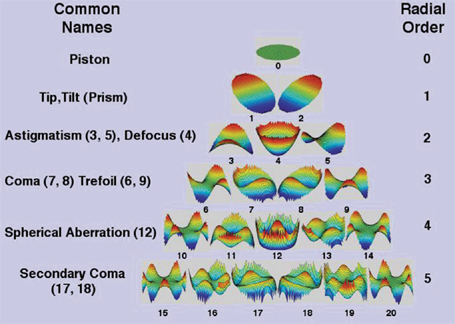 Two other important measurements used in wavefront aberrometry are modulation transfer function (MTF) and point spread function (PSF), which both indicate the overall quality of the retinal image. The MTF describes the ratio of image contrast to object contrast as a function of the spatial frequency of a sinusoidal grating across a patient's range of visual performance. It can also enable individualized comparisons to patients who demonstrate higher quality vision. The PSF defines how a single object is imaged by the optical system and provides a means to display how various aberrations affect a point of light, and therefore demonstrates the fundamental quality of a patient's vision. Although both Zernike polynomials and RMS are effective mathematical systems to describe optical aberrations, other factors such as perception, retinal image quality and human subjective interpretation of sight influence the quantity and quality of what a patient actually sees.

When evaluating routine refractive errors with aberrometry, uncorrected LOAs typically mask the presence of HOAs, which are relatively small in magnitude. An important point to remember when you apply a contact lens to the eye is that as the lens already either partially or completely corrects LOAs, the HOAs become more readily apparent. Usually this effect is limited to just myopic or hyperopic defocus depending upon the amount of residual astigmatism that remains. Certainly, uncorrected astigmatism through a contact lens would appear as a residual LOA in a wavefront error map. Therefore, taking wavefront measurements through a contact lens on the eye provides an excellent method to evaluate HOAs of the eye-contact lens optical system.

With regard to high- and low-contrast visual acuity for large pupils, toric soft lenses provide approximately one-half line or more improvement of vision compared to aspheric contact lenses. It's important to determine the effect of incorporating a spherical equivalent refraction compared to using a toric soft lens to correct astigmatism. One patient refracted with a –4.00 –1.00 ×180, which corrected vision to 20/20. Figure 4 shows that changing from a –3.75D Acuvue Advance (Vistakon) sphere to a –4.25D Acuvue Advance sphere (spherical equivalent) actually reduced visual performance and is not a satisfactory solution to this patient's vision problem. The MTF actually decreased from 0.684 to 0.453, demonstrating a reduction in retinal image quality. Using an Acuvue Advance for Astigmatism (Vistakon) toric soft lens with no aberration control (Figure 5) significantly improved this patient's visual acuity, PSF and MTF, which improved from 0.684 to 0.998, representing almost ‘perfect’ vision. Further, Figure 6 shows that when we compare a toric lens (O2Optix Toric, CIBA Vision) to a spherical lens with aspheric optics (PureVision), visual acuity, PSF and MTF (change from 0.398 to 0.651) were superior with the toric lens.

While aberration-controlled soft lens designs typically produce variable clinical results at best, primarily due to the flexible nature of the material, rigid lens materials appear to have more success in correcting HOAs. Certainly this is attributable to the more rigid nature of the material. Conforma Laboratories has recently introduced an aberration-controlled line of GP lenses called HD Optics. This design incorporates aspheric curvatures on the front lens surface, which are designed to reduce inherent aberrations and improve vision. The front-surface curvature varies depending on the lens power, and in that sense HD Optics represents a more customized (at least for power) ‘corrected curve’ design.

In an attempt to evaluate the performance of HD Optics, I had two identical lenses prepared except that one lens incorporated a front-surface corrected curve (HD Optics) while the other did not. I placed each lens on the patient's eye and, after settling, performed a wavefront scan through the lens. Figure 7 shows the comparison between a Menicon spherical contact lens and the Conforma HD Optics contact lens. While visual acuity was subjectively acceptable for both lenses, PSF and MTF (change from 0.636 to 0.741) charts demonstrated an overall improvement in retinal imaging with the aberration-controlled design. Figure 8 shows similar improvements in visual acuity, PSF and MTF (change from 0.559 to 0.734) for the aberration-controlled spherical lens manufactured by Conforma Laboratories compared to a spherical GP lens manufactured in Boston XO (Bausch & Lomb).

Another attempt to improve vision when residual astigmatism is present incorporates the use of two uniquely different lens designs: Panofocal (Conforma Laboratories) and RAU (Advanced Corneal Engineering). While the approaches are similar in that a spherical equivalent refraction is attempted, the Panofocal design adds plus power to the periphery and the RAU design adds minus power to the periphery. To compensate for a residual refractive correction of Pl –1.00 ×114, I incorporated a Panofocal front surface design with a spherical GP contact lens. In this example, aberrometry obtained through the Panofocal contact lens demonstrated improvement in visual acuity, PSF and MTF (change from 0.476 to 0.579) compared to the spherical contact lens (Figure 9). Moreover, the patient appreciated the improvement in his vision.

Customized aberration-corrected lenses are currently being investigated by WaveTouch Technologies, which hopes to introduce this technology to the marketplace soon. The challenges facing customized aberration-corrected contact lenses include maintaining lens centration, alignment and rotation to ensure the proper registration of the prescription. Unlike applying a wavefront correction directly to the corneal surface, which is relatively fixed and stable, a contact lens represents a dynamic optical system that moves vertically and rotationally on the eye in relation to the blink. Companies designing such lenses will need to use prism-ballasted lens designs for both soft and rigid lenses as well as dynamic stabilization techniques for soft contact lenses that attempt to control on-eye lens rotation to minimize lens movement.

The vast majority of contact lenses in today's market are mass-produced, molded soft or silicone hydrogel lenses. To achieve aberration control on these lenses, manufacturers must make approximations for the general population's higher-order distortions. Moreover, spherical lens designs can correct only rotationally symmetrical aberrations such as spherical aberration. Subsequently, some patients will experience improvement in their vision while others may actually suffer a detriment.

For aberration-controlled optics to be successful with contact lenses, the fit must achieve consistent geometric centration over the line of sight. Decentration of the contact lens will result in additional unusual aberrations. In addition, some aberrations such as coma and trefoil require rotationally stable contact lenses, while other aberrations such as spherical aberration are symmetrical and can be corrected by non-rotationally stable lens designs. Each aberration-controlled lens, however, would have to be individually manufactured for the patient's specific LOAs and HOAs, resulting, by today's standards, in a more expensive lens. Regardless, the quest for superior vision will drive patients toward more individualized lens corrections and continue to grow this marketplace. CLS

For references, please visit www.clspectrum.com/references.asp and click on document #156.