Knowing signs and symptoms can help you detect rejection early and increase chances of success.

The cornea is the most commonly transplanted solid tissue, with more than one million corneal transplants performed in the United States since the 1960s (Eye Bank Association of America, 2009; Kaufman et al, 1998; Sellami et al, 2007). The most common indications for corneal transplant include corneal dystrophy, aphakic bullous keratopathy, and keratoconus (Rao, 1991). Full thickness (Figure 1) or lamellar grafts are able to restore vision or integrity to a cornea that has been irreversibly compromised by disease or trauma when all other medical management options have failed.

Corneal graft rejection is an immune mediated response that is the primary reason for graft failure (Sellami et al, 2007; de Freitas, 2006). This article will review rejection and how to minimize its risk of occurrence, especially in patients who want or need contact lenses post-operatively.

The eye is considered to have immune privilege, meaning there is a lack of immune response against allografts transplanted into the ocular microenvironment secondary to a blood barrier and lack of lymphatic drainage (Taylor, 2009; Streilein, 2003). However, rejection is still possible with an incidence between 9 percent to 12 percent, and rejection remains a lifelong risk (Sangwan et al, 2005; Triqui et al, 2005). Human leukocyte antigens (HLA) are glycoproteins that function as cell surface antigens. The human body uses HLAs to recognize self versus nonself. It takes 10-to-14 days for sensitization to occur during which there is the potential for the recipient to recognize the donor as non-self. Should this occur, then a cascade of inflammatory events is initiated against the graft (Panda et al, 2007). Any one layer, or multiple layers in combination, can be affected during a corneal graft rejection.

A corneal graft rejection is inflammatory in nature and so the patient will initially notice redness, irritation, or pain and sometimes photophobia. A significant reduction in visual acuity will also be evident as the rejection progressively worsens. If a corneal transplant patient should report these symptoms to your office, corneal graft rejection should be at the top of your differential and you should see the patient immediately.

A rejection of the epithelium can occur within the first few months after the transplant and will appear under slit lamp exam as a line of progressively disrupted tissue. Although self-limited, treatment of this rejection type is indicated as it may foreshadow a stro-mal/endothethial rejection.

Stromal rejection causes the stroma to appear thickened and hazy, and almost always occurs in concert with an endothelial rejection (Kaufman et al, 1998). The signs of an endothelial rejection include a distinct line of cellular compromise, known as Khodadoust line (Figure 2), which has the potential to advance across the entire cornea. Corneal edema (Figure 3) and epithelial disruption (Figure 4) will follow as the endothelium is compromised, and keratic precipitates are also commonly observed. 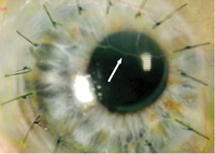 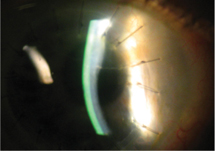 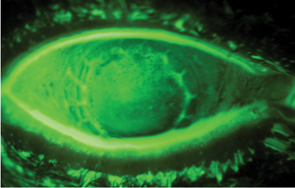 It is important to rule out etiologies other than graft rejection that may have initiated an anterior inflammatory cascade.

Primary Graft Failure Usually occurs within the first month of the transplant and is the result of donor endothelial dysfunction (Kaufman et al, 1998). The key is that if there is failure with the graft within the first few weeks, corneal graft rejection can be ruled out because the recipient would not have had time to sensitize to the donor's tissue.

Corneal Ulceration A marked epithelial defect, and infiltrates would be observed.

Intraocular Pressure (IOP) Spike An elevated IOP of 40mmHg or higher is needed to cause severe stromal edema and epitheliopathy.

Herpes Simplex Keratitis (HSK) Recurrent HSK is possible and can initiate a graft rejection and vice versa. If the initial lesion is geographic rather than dendritic, differentiating HSK from graft rejection can be difficult.

Patients who have undergone a corneal transplant have a lifelong risk of rejection. Long-term treatment with prednisolone acetate 1% (Pred Forte, Allergan) protects against immunologic graft rejection and is usually prescribed q.i.d. for two-to-three months and then tapered down. Some patients may completely stop prednisolone treatment, while others may use it q.d. or less to prophylactically prevent graft rejection. Patients with previous HSK need to prophylactically and post-operatively be treated with acyclovir to reduce recurrence. Patients who have had a previous rejection episode need to remain on immunosuppressive therapy, as their rejection risk is greater (Epstein et al, 2006). If graft rejection should occur, aggressive treatment with topical prednisolone acetate 1% is the mainstay treatment (Panda et al, 2007). The reversibility of preventing a rejection from becoming a graft failure is estimated to be between 63 percent and 91 percent (Sangwan, 2005; Epstein et al, 2006). If the graft rejection is severe and there is no improvement after two-to-three weeks of immunosuppressive treatment, then the graft is considered failed.

A significant number of patients wear contact lenses after having corneal transplant surgery. Although some patients may choose contact lenses as an option to be glasses-free, other patients may have to wear them to avoid anisometropia issues or to mask corneal irregularity. In general, wearing contact lenses does not in itself increase the risk for corneal graft rejection; however, complications from lens wear can (Kaufman et al, 1998; Geerards et al, 2006). Neovascularization, especially stromal, can put the patient at increased risk for graft rejection. Careful and frequent monitoring of graft patients is required so that you can make changes if neovascularization should initiate (Figure 5). Once vessels start to form in the host cornea, they can quickly invade the graft. Whether using soft or GP lenses, fitting patients in high-Dk materials on a daily wear basis will help minimize the risk for hypoxia-related neovascularization. Besides hypoxia, a contact lens may also lead to corneal neovascularization by irritating the cornea mechanically, especially if the contact lens has interaction with an exposed suture. 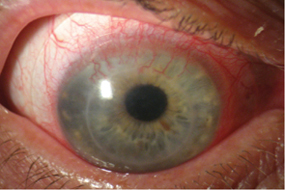 If rejection should occur, patients should discontinue their lens wear immediately so as to not interfere with immunosuppressive therapy. If the rejection is successfully reversed, a reassessment of lens fit and power is indicated.

A 38-year-old male reported on an emergent basis complaining of redness and irritation of his left eye for two days. The patient previously underwent a penetrating keratoplasty of his left eye after developing severe corneal scarring secondary to a chemical injury. At the previous appointment two months prior, his vision measured 20/40 OS with a scleral GP lens and he was using Pred Forte q.d. He reported running out of the Pred Forte just before the onset of his symptoms. The patient's vision with the contact lens now measured 20/50. A slit lamp exam showed 2 conjunctival injection and 1+ keratic precipitates. His left cornea was without staining, infiltrates, or observable edema. IOP of the left eye was 14mmHg, and all other findings were unremarkable.

We instructed the patient to discontinue lens wear and to restart the Pred Forte in his left eye every two hours while awake for seven days and to return in one week. At his follow-up appointment, the patient reported significant improvement of his symptoms, compliance with the Pred Forte, and that he had not worn his lens. Slit lamp exam showed less redness and no additional keratic precipitates. The patient was slowly tapered to using Pred Forte q.d. and successfully resumed his contact lens wear.

Corneal graft rejection is an immune mediated response that is the primary reason for graft failure (Sellami et al, 2007; de Freitas et al, 2006). Risk factors for corneal graft rejection include neovascularization of the graft, history of rejection episode, and a graft size >8mm (Sellami et al, 2007; Epstein et al, 2006; Wagoner et al, 2007). There is no increased risk for rejection if the second eye is done, especially if they are done 18 months apart (Rao et al, 1999; Ozbek et al, 2008). Long- term treatment with prednisolone acetate 1% has been proven to protect against immunologic graft rejection (Nguyen et al 2007). There is evidence that other topical immunosuppressive agents such as loteprednol etabonate (Lotemax, Bausch & Lomb), rimexolone (Vexol, Al-con), and topical cyclosporine (Restasis, Allergan) may also have a role in preventing graft rejection while putting the patient at less risk for an IOP response (Randleman et al 2006). Besides topical immunosuppressive therapy, an intracameral injection of triamcinolone acetonide has been suggested to play a role in reversing rejection (Maris et al, 2008). Bevacizumab (Avastin, Genentech/Roche) may be an adjunct therapy for managing rejection if neovascularization is present (Awadein, 1992).

In the past decade, researchers have tried to determine whether matching HLA types or ABO blood types between host and recipient would help to decrease the likelihood of rejection. In 1992, The Collaborative Corneal Transplantation Studies (CCTS) reported that matching either HLA types or ABO blood type did not significantly decrease the risk for graft rejection. However, a 2004 study found contradictory results and reported that HLA typing may decrease incidence of graft rejection (Reinhard et al, 2004). Most recently, in 2008 another team of researchers confirmed results from the CCTS that ABO incompatibility did not increase the risk of graft rejection (Dunn et al, 2008).

Descemet's Stripping Automated Endothelial Keratoplasty (DSAEK) is a recent procedure to treat Fuch's dystrophy patients that replaces only the diseased endothelium. There is a hypothesis that it may lower the risk for rejection for several reasons:

AlphaCor (Addition Technology) keratoprosthesis, which is an artificial cornea device, is an option for patients who suffer from bullous keratopathy secondary to graft rejection but are unlikely to have a successful repeat transplant (Ngakeng et al, 2008).

Corneal graft rejection can lead to transplant failure, but with early detection and aggressive immunosuppressive treatment with topical prednisolone, it can be reversed. It is important that patients be properly educated about the signs and symptoms of graft rejection so that immediate treatment can be administered. Fit patients who wear contact lenses post-operatively in high-Dk lenses on a daily wear basis to reduce hypoxic risk and secondary neovascularization. Frequent follow-up visits are necessary to continually monitor for neovascularization and unhealthy contact lens-to-eye interaction. The development of lamellar transplant surgeries and improved immunosuppressive therapies may help to improve success rates for patients for whom corneal transplantation is their only alternative. CLS

To obtain references for this article, please visit http://www.clspectrum.com/references.asp and click on document #166.