Together, two major developments in the field of eye care may substantially change our profession. The drastic increase in the prevalence of myopia and the knowledge that the peripheral retina plays a dominant role in the development of myopia progression may dramatically change the scope of how we practice. Contact lens myopia control has gained traction and new evidence suggests it has great potential, although many questions remain unanswered for the moment.

In Asia the number of myopic children is even more dramatic, exceeding 80 percent in Taiwan (Lin et al, 1999).

The second major myopia development comes from the field of contact lenses, more precisely from corneal reshaping with orthokeratology lenses (Figure 1). For decades, practitioners actively fitting this modality reported anecdotal evidence that myopia appears to develop at a much slower rate in children wearing an overnight orthokeratology modality than in children wearing soft lenses or glasses. For years this clinical belief was disregarded because it was thought to be due to corneal change rather than to slowing of axial elongation. Corneal flattening alone would not yield a potentially permanent slowing of myopia progression, but recent work has proven that there is indeed a significant slowing of axial elongation in kids wearing overnight orthokeratology versus other correction methods. 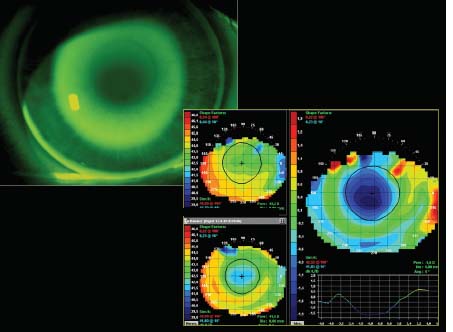 Figure 1. Anecdotal evidence suggests that myopia appears to develop at a much slower rate in children in an overnight orthokeratology modality than in children wearing soft lenses or glasses.

The big question is: why is this happening? For that we have to take a look at the peripheral retina. In the 1970s, a Dutch army ophthalmologist, Hoogerheide, reported on "relative hyperopia in myopes." In emmetropic eyes, light focuses at or slightly in front of the entire retina. In corrected myopes, the central image is focused on the retina, but light is focused behind the peripheral retina (Figures 2 and 3). 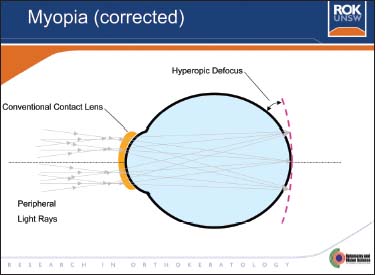 Figure 2. Myopic correction with a conventional contact lens creates a hyperopic defocus in the periphery that stimulates further increase in axial length. 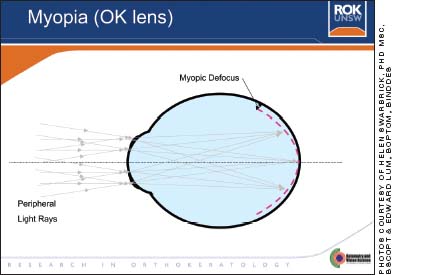 Figure 3. Myopic correction with an orthokeratology lens design creates a myopic defocus in the periphery, which may slow myopic progression.

Through emmetropization, the retina moves to where light is focused. The eye grows slower in response to myopic blur and faster in response to hyperopic blur in an attempt to obtain clear vision. Previously, the central retina, or macula, was thought to be responsible for this emmetropization process, but recent animal studies indicate that the peripheral retina is more important for emmetropization than previously believed. Form deprivation (vision through a translucent shell) causes primate eyes to become myopic, even when only the peripheral retina is affected. If the peripheral form deprivation is removed, the eye returns to emmetropia, even if the fovea is ablated and no longer functioning (Smith et al, 2005). The same is true with peripheral hyperopic blur, which leads to myopic eye growth (Smith et al, 2009). This explains why correction of accommodative lag with bifocal spectacles may not be as effective as was theorized. The central blur may not be as strong of a signal to control eye growth as was previously believed.

Glasses and contact lenses lead to similar amounts of peripheral hyperopia when myopia is corrected. Spherical contact lenses have no effect on axial elongation in children, compared to spectacles (Horner et al, 1999; Walline et al, 2008). GP lenses were found to affect myopia progression, but the majority of the treatment effect was due to corneal flattening, and axial elongation—the affect that is assumed to represent a permanent treatment effect—was not different between GP and soft lens wearers. (Katz et al, 2003; Walline et al, 2004). Soft and GP contact lenses both result in peripheral hyperopic blur, similar to glasses, indicating why they may not slow the progression of myopia.

As the peripheral retina seems to be responsible, at least in part, for eye development in children, orthokeratology experts wondered, "Is this the mechanism responsible for the myopia progression reduction in corneal reshaping?" Several clinicians and researchers have reported that the midperipheral corneal steepening in myopic orthokeratology may lead to peripheral myopic blur, which may act as a signal to slow eye growth. Indeed, orthokeratology has been found to create central emmetropia with peripheral myopia (Charman et al, 2006; Queiros et al, 2010).

Two non-randomized clinical trials report approximately a 50 percent reduction of axial elongation with orthokeratology contact lens wear, and Swarbrick and colleagues (2010) recently presented data from the first randomized clinical trial at ARVO. Fourteen myopic children (ages 10 to 17 years) of East Asian ethnicity were fitted with orthokeratology lenses in one eye and conventional GP lenses in the other eye. Lenses were worn for a six-month period, and after a two-week washout without lens wear, the lens-eye combination was reversed for six months. Axial length had increased by 0.06 ± 0.09mm in the GP eye (protected post-hoc paired t-test, p=0.014), but showed no significant change (−0.02 ± 0.08 mm) in the ortho-k eye (p=0.348). During the second six-month period, axial length in the GP eye increased by 0.11 ± 0.11 mm (p=0.002), whereas in the ortho-k eye there was no significant change in axial length (−0.02 ± 0.12 mm; p=0.460) (Swarbrick et al, 2010).

Soft bifocal lenses with a distance center may affect peripheral myopia in a way similar to orthokeratology, and they have also shown to effectively slow down myopia progression. Thomas Aller, OD, a California practitioner, published a case report of 12-year-old identical twins who were randomly fit with distance-center bifocal and single vision soft contact lenses (Aller and Wildsoet, 2008). The child wearing the single vision lenses over the first year showed significant myopic progression, increasing −1.19D (binocular average), while the child wearing the bifocal contact lenses showed no progression (+0.13D). Since then, several groups have described a variety of soft lens designs to correct peripheral hyperopia and potentially slow myopia progression.

Nour and colleagues (2010) reported fitting marmosets with soft lenses that have two alternating powers (−5.00D and +5.00D) arranged in concentric zones centered around a −5.00D central zone and resulting in similar surface area for each power over a 2.8mm pupil (average diameter of marmoset pupils). The study indicated that when retinal defocus of opposite sign is imposed simultaneously on the primate retina, myopic defocus appears to dominate in most, but not all, of the tested eyes. These results suggest that properly balanced multizone contact lenses may be an effective treatment for preventing, or even reversing, the development of myopia (Nour et al, 2010).

John Phillips, from the University of Auckland in New Zealand, showed that myopic peripheral retinal defocus with a simultaneous clear central retinal image using a dual-focus soft lens in 40 11- to 14-year-old children slowed childhood myopia progression over a 10-month period (Phillips and Anstice, 2010). These lenses had a central myopia correction zone and a concentric treatment zone with 2.00D of peripheral retinal defocus. The control lens was a single vision distance lens (same lens form but without treatment zones) worn on the fellow eye. Myopia progression and eye elongation were significantly reduced in eyes wearing the dual-focus lenses than in those wearing single vision lenses. The rate of progression was approximately 0.55D for the dual-focus lens compared to approximately 1.00D for the control lens.

What Are The Next Questions?

Along those same lines, what happens when the child discontinues contact lens wear? Do the eyes increase progression, then stabilize where they would have without myopia control treatment? Do they remain less myopic than they would have been without myopia control treatment? This is a particularly hard issue to investigate from an ethical point of view because if a treatment slows myopia progression, then it is difficult to ask the patients to stop using the treatment.

To begin answering some of these questions, we need to determine the true mechanism of the treatment effect. In other words, how and why does the peripheral retina detect the optical signals that may control axial elongation of the eye? The control of eye growth appears to be local to the retina, as opposed to higher level neurological processing, perhaps in the brain. Chickens with severed optic nerves still respond to stimuli that signal myopic eye growth (Wildsoet and Wallman, 1995), and optical signals to increase eye growth presented to only half of the eye result in a myopic portion of the eye, not an entirely myopic eye (Smith et al, 2009). However, the specific mechanism responsible for detecting the optical signal is still unknown.

Despite all of the questions that remain, some answers have been provided. For example, if a contact lens myopia control treatment is developed, we can be certain that children are capable of wearing the treatment. Children have been shown to be capable of wearing and independently caring for soft, GP, and orthokeratology contact lenses (Cho et al, 2005; Walline et al, 2009). Although children are able to independently care for their lenses, they should be reminded of the appropriate care regimen on a regular basis to help them maintain good standards of care and decrease the likelihood that they will experience problems with their lenses.

This is a very exciting time for treating and possibly reducing myopia in children, so read the literature, seek continuing education, and pay attention to the lay press because you don't want to be caught off guard if and when a new myopia control treatment becomes available. CLS

For references, please visit www.clspectrum.com/references.asp and click on document #181.