A successful contact lens fit requires the appropriate selection of lens material, design, and lens care system. Inappropriate selection of lens care system can result in numerous undesirable objective and subjective consequences as documented by Weissman (2004) including, among others: hyperemia, papillary hypertrophy, corneal staining, corneal infiltrates, symptoms of dryness and burning, and other indicators of poor lens wearing comfort.

The SynergEyes (SynergEyes, Inc.) hybrid contact lens received FDA approval in 2005. It is comprised of a GP center fabricated from Paragon HDS (Paragon Vision Sciences) material along with a hydrogel soft skirt fabricated from a 27-percent water content polyHEMA material. The goal of hybrid lens fitting is to achieve visual performance similar to that of a GP lens while providing comfort closer to that of a soft lens. Compatibility of the SynergEyes hybrid lens with an associated lens care system is critical to overall success with SynergEyes lens wear.

We performed a multicenter clinical trial at five sites in accordance with the tenets provided by the Declaration of Helsinki and in adherence to the guidelines of the IRB reviewing this investigational protocol. Each investigator obtained informed consent from patients before entering into the investigation. The study design was an investigator-masked, randomized, two-week crossover investigation. Thirty-one subjects were enrolled in the study. All subjects were adapted SynergEyes A hybrid lens wearers.

We evaluated four lens care systems: Clear Care (Ciba Vision), ReNu MultiPlus (Bausch + Lomb), Complete (Abbott Medical Optics), and Aquify (Ciba). Subjects were randomly assigned to one of the four lens care systems in random succession and were dispensed a new pair of SynergEyes A lenses with each change in lens care system. Subjects would wear the lenses and use the specified lens care system for two weeks. Each subject was entered into the clinical protocol after they satisfied the inclusion/ exclusion criteria. Only subjects who were current wearers of SynergEyes A lenses on a daily wear schedule were selected to enter the investigation. Subjects were required to have a refractive astigmatism of 6.00D and be older than 18. Subjects had to be willing to undergo refitting with new SynergEyes A contact lenses provided by SynergEyes, to wear only the study lenses during the study comparison trial period, and to maintain a wearing schedule of a minimum of six hours, at least six days a week.

Subjects had normal healthy eyes with no evidence of severe tear insufficiency, lid infection, or structural abnormality; a conjunctiva free of infection; a cornea clear and free of edema, scars, staining, vascularization, infiltrates, or opacities when examined by slit lamp biomicroscopy; and no evidence of iritis or uveitis. Subjects were in good general health with no active internal or external disease as well as no history of allergies that would contraindicate solution use and/or "normal" lens wear. Subjects were not taking or anticipating taking drugs that might alter normal ocular physiology (eye drops containing ephedrine, phenylephrine, etc.), thereby affecting or interfering with successful lens wear.

Subjects had to attend all scheduled office visits. No subjects who were pregnant, anticipating pregnancy, or lactating were entered into the clinical investigation. Subjects using any topical ocular medication such as steroids, anti-infectives, or autonomic drugs, or who were taking any systemic medications that the investigator believed would interfere with the study, were not entered into the study.

Each investigator collected demographic information and performed a baseline slit lamp evaluation as well as routine baseline evaluation procedures for each subject. At the dispensing visit, each subject applied the study lenses and was evaluated for movement, push-up test, position, lag, pre-lens tear film (PLTF) quality, and Snellen visual acuity. Subjects were asked to report on lens handling, lens comfort, and visual clarity. Subsequent measurements were taken at the initial visit and after two hours of lens wear at the exit visit for all four lens care systems. After lens removal, investigators performed an ocular examination of the anterior segment using the slit lamp biomicroscope.

At the end of the study, subjects were asked to make a forced-choice decision in terms of their preferred lens care system for comfort, visual clarity, lens handling, and the best solution regimen. 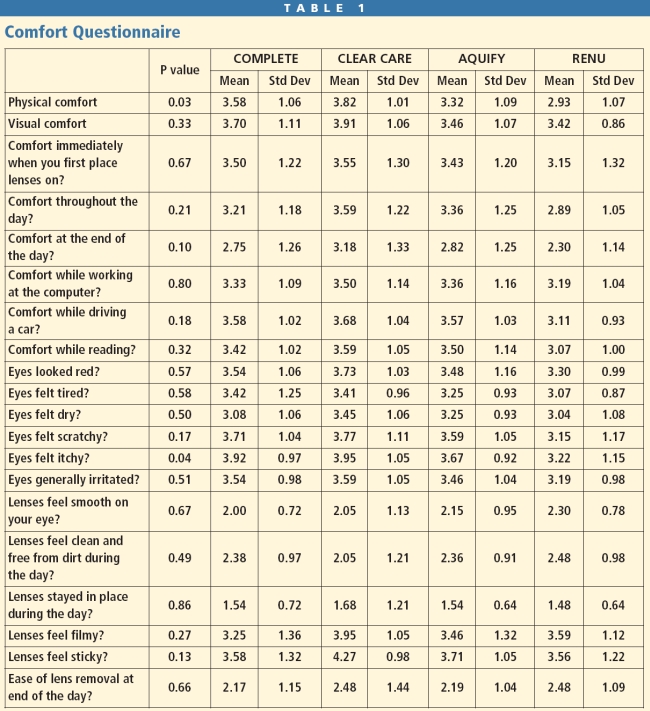 Results from the subjective "vision questionnaire" explored responses to specific questions relating to the subject's visual performance while wearing SynergEyes A lenses with the care systems evaluated. Table 2 shows that there were no significant differences among the tested lens care systems for any questions in the vision questionnaire (criteria p=0.05 or greater). 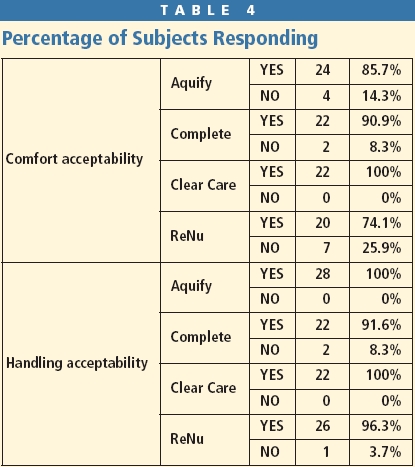 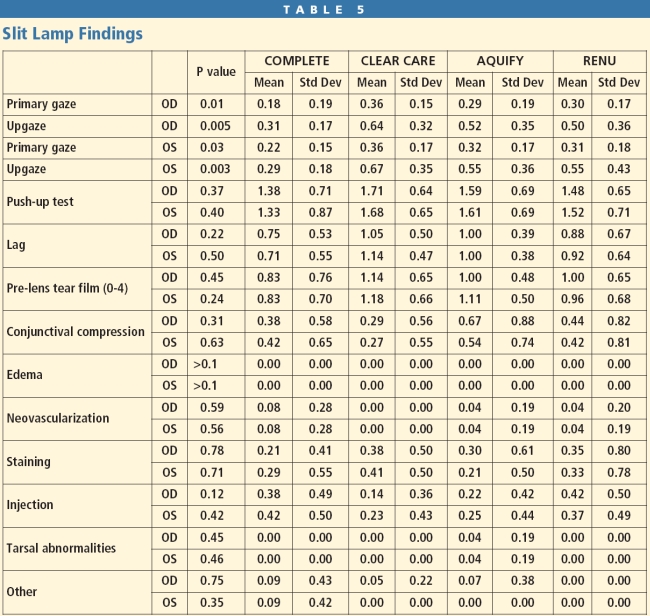 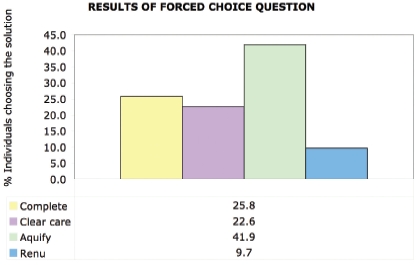 These results illustrate the importance of selecting the appropriate lens care system to create the opportunity for the greatest lens comfort, optimal lens movement, acceptable lens handling, and the best vision clarity.

ReNu MultiPlus seemed to fare the worst with the SynergEyes contact lens of all four contact lens care systems tested. It was subjectively rated as significantly less comfortable compared to Clear Care and Complete and was rated as significantly more likely to cause eye itching in comparison to Complete. ReNu MultiPlus was also rated last in the forced choice of preferred contact lens care system by subjects at the end of the study (by only 9.7 percent of the subjects).

Based on the outcomes of this study the four available contact lens care systems tested (Clear Care, Aquify, Complete, ReNu MultiPlus) can be considered compatible with SynergEyes contact lenses. CLS

For references, please visit www.clspectrum.com/references.asp and click on document #175.