The patient in this photo presented with a history of reduced vision in his right eye. His ocular history was significant for trauma; in his occupation as a construction worker he had suffered a blow to the right eye with the end of a board. Since that accident, he experienced slowly progressive reduction in vision in the affected eye. 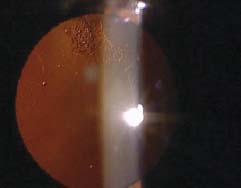 One segment of the Beaver Dam Study sought "to describe the long-term incidence of nuclear cataract, cortical cataract, and posterior subcapsular cataract (PSC) and to evaluate age and cohort effects on these rates." The researchers evaluated 5,925 eligible individuals ages 43 to 84 years old for the presence of cataracts or a history of cataract surgery. Notably absent from this study is anterior subcapsular cataracts (ASCs), which is the condition pictured here.1

A Korean study of 13,029 eyes that had undergone cataract surgery found that ASC accounted for only 4.8 percent of cases. The authors reported that ASCs differ from other types of cataracts in several ways. Unlike more common forms of cataract, ASCs are more prevalent in younger populations; 74 percent of individuals who have ASC are younger than 60 years of age, with an average age of 51.9 years. They also reported that 82 percent of all ASC occurs in males. While the more common forms of cataract are linked to increasing age2, ASC is strongly associated with ocular trauma3, which may account for its higher incidence in males; it as also coupled with inflammation and dermatologic conditions such as atopic keratoconjunctivitis. Trauma as uncommon as a bee sting to the cornea has caused ASC.4 This condition has also been linked to retinoblastoma.5

In both PSC and ASC, matrix metalloproteinases (MMPs) are believed to mediate the development of the opacities. When clinicians diagnose early ASC, it is important to carefully question the patient regarding a recent history of trauma, atopy, and other conditions related to ASC. Because MMPs have potential causative roles in PCO and ASC, inhibitors of these molecules are being investigated as a possible means of preemptively preventing progression of cataracts. In the future we may use matrix metalloproteinase inhibitors to limit the impact of these enzymes and thus slow or halt progression of fibrotic cataracts such as ASC and PSC.8