Workshop offers insight into the importance of appropriate patient selection.

In addition to the importance of predicting visual outcome, level of experience with fitting ortho-k lenses undoubtedly affects success rate. Cho et al (2002) presented a series of interviews with 12 optometrists who had been practicing ortho-k for at least two-and-a-half years. Cho reported a success rate of better than 80 percent for most practitioners, in which success was defined as the percentage of the target reduction agreed upon with patients that was actually achieved.

Cho also mentions that "it would be unlikely that we would be able to learn about the practice of those practitioners at the lower end of the experience and ability scales." Similarly, Koffler et al (2004) reported an overall success rate of 80 percent, although success was never defined.

This article will summarize the experience of novice ortho-k practitioners who participated in an ortho-k fitting workshop at the SUNY State College of Optometry.

This sponsored ortho-k workshop was designed to introduce and teach novice practitioners the principles of fitting Paragon Vision Sciences’ Corneal Refractive Therapy (CRT) lenses. Practitioners participating in the workshop included fourth year optometry students as well as practitioners who recently graduated but were no more than two years out of optometry school. Before participating, all practitioners were required to receive Paragon CRT fitting certification training.

Patients were identified by the participating practitioners based on a set of patient inclusion and exclusion criteria (Table 1) created in conjunction with the workshop sponsor (Paragon Vision Sciences, January 2009). Because this was originally conducted as a workshop, we retrospectively decided to analyze the associated data. This was approved by the Institutional Review Board (IRB) of the SUNY State College of Optometry.

The 19 patients participating in the workshop were fit with Paragon CRT HDS 100 (paflufocon D) lenses. The initial diagnostic lens was determined by using the initial lens selector calculator provided by Paragon, which required the spherical portion of each patient's manifest refraction in minus cylinder form and flat keratometry reading. Fluorescein patterns and over-refractions were evaluated and were deemed acceptable according to the fitting protocols (Table 2). The patients were dismissed with the lenses and instructed about proper lens care, application and removal techniques, and the lens wear schedule in accordance with the manufacturer's guidelines.

Lens re-fits were made upon pre-set criteria (Table 3). If and when inappropriate lens fits were discovered, patients were immediately re-fit with new lenses and were rescheduled for the appropriate subsequent follow-up visits. 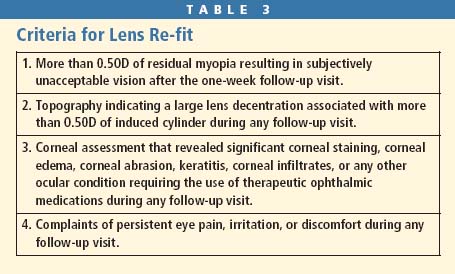 Overall, 10 of the 19 patients fit as part of this workshop discontinued participation, four because of excessive lens awareness, one due to recurrent abrasions, one due to unacceptable vision, one due to lack of interest, one due to excessive halos, and one due to inability to return for follow-up. The remaining nine were able to achieve subjectively acceptable 20/25 or better Snellen acuity without correction throughout the day at the one-month follow-up visit.

Although there did not appear to be any significant difference between refractive characteristics of the groups in terms of sphere power, cylinder power, flat keratometry, and eccentricity, we can still draw insight about the disparities between these two groups when investigating the reasons for what appears to be a relatively high rate of discontinuation.

It is important to note that all patients who participated in this workshop were found retrospectively to have no history of GP lens experience and in fact were all successful soft lens wearers before the workshop. The four patients who discontinued ortho-k wear due to lens awareness reported that the benefits of ortho-k were not worth the lens awareness they encountered at night.

A history of successful soft lens wear may possibly make patients less motivated to switch their lens modality to ortho-k lenses if their only problem with ortho-k lenses is excessive lens awareness. This would suggest that patients with successful GP wear or no soft contact lens experience may make for better candidates for ortho-k compared to those who are successful soft lens wearers without any complaints. The success rate by this group of novice ortho-k practitioners might then have been significantly improved (nine out of 15 or 60 percent) if discontinuations due to lens awareness were avoided. Such a success rate would more closely resemble the 80 percent success rates of more experienced practitioners as reported by Cho (2002) and Koffler (2004).

The experience gained from this workshop underscores the importance for novice ortho-k practitioners to be cautious when fitting patients who may exhibit considerable amounts of lens awareness during the initial trial fitting period and/or are asymptomatic successful soft lens wearers. CLS

For references, please visit www.clspectrum.com/references.asp and click on document #180.