Arecent study by the American Optometric Association (AOA) and Vistakon looked at the prescribing habits of American optometrists when they fit children with contact lenses. A survey was sent to 4,004 AOA practicing optometrists in July. The 576 (14.4 percent) surveys returned by Aug. 2, 2010 were included.

Two out of three (67 percent) fit children younger than 8 in glasses only. At ages 8 to 9 (51 percent) and 10 to 12 (71 percent), those surveyed most often fit children in glasses as the primary vision correction and prescribe contact lenses as a secondary correction. 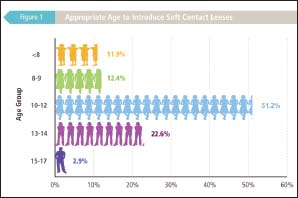 Figure 1. The ages that optometrists surveyed feel it is appropriate to introduce soft contact lenses.

A key purpose of the survey was to determine whether optometrists have changed their contact lens fitting criteria in the last year and what caused the changes. Three in 10 who are "more likely to fit" children with lenses attribute the change to daily disposable lenses; 23 percent cite improved lens materials; 19 percent say they are more likely to fit children because of requests from the child and/or parent; and 10 percent say that "recent research/studies" on the subject and children's participation in activities/sports have influenced their decision.

While only a small percentage say they are less likely to fit contact lenses in children, those who provided an explanation of why attribute their change to the poor hygiene and maturity levels seen in younger children.

Respondents ranked various lens properties that they consider when fitting a child. All respondents cite the visual acuity achieved with a lens as important, and virtually all rate ease of handling (99 percent), oxygen permeability (99 percent), comfort (98 percent), and replacement schedule (96 percent) as properties that influence their decision. While not rated as high as the other properties, three-fourths say lenses that offer ultraviolet protection influence their decision.

Contact lenses play an important part in children's lives. With the advent of new materials and modalities, practitioners feel they can safely prescribe contact lenses to younger patients. CLS

Dr. Sindt is a clinical associate professor of ophthalmology and director of the contact lens service at the University of Iowa Department of Ophthalmology and Visual Sciences. She is also the chair-elect of the AOA Contact Lens and Cornea Section. She is a consultant or advisor to Alcon, Ciba Vision, and Vistakon and has received research funds from Alcon. You can reach her at christine-sindt@uiowa.edu.