Market and survey data show that the industry remained largely unaffected in 2010 by the state of the economy.

The annual report, which we print each January, is certainly a tradition for us and for our readership. It's a time for us to look back at the previous year to summarize where we've been and to celebrate and learn from our past. It's also a resource that we can use to look forward to 2011 and beyond relative to potential upcoming major events or trends that we need to anticipate.

In last year's annual report (published January 2010), there was discussion and focus on the current state of the economy in general and relative to its potential impact on the contact lens market. Without question, the economy has been challenging for many of us, but as you will see, the market again appears to be weathering the storm. That said, let's now look at the industry in terms of general market trends and specific current practice trends before moving on to other events and happenings in the industry.

It's over! In case you missed it, the “great recession” was officially declared over in June 2009. It was the longest and probably the most significant one we experienced since World War II. Although the recession was officially declared over, it is obvious that we have not fully recovered. Unemployment remains stubbornly high. The gross domestic product for 2010-2011 is expected to be low. Home sales are certainly struggling, while interest rates and inflation will remain low going into next year. In addition, it is uncertain how the 2010 mid-term election results will impact us in terms of changes in economic policies and agenda. However, as you will see, those involved in our field—both in general and more specifically in the area of contact lenses—have much to be optimistic about.

Data obtained from Robert W. Baird & Co. (Jeff Johnson, OD, CFA, director, senior research analyst) show that as of September 2010, the ophthalmic sector as a whole remains strong. There was a marked slowdown in the ophthalmic market starting in the fourth quarter of 2008, with improvement through 2009 and into 2010. The contact lens industry remains healthy, with modest U.S. (6 percent) and worldwide (5 percent) growth predicted for 2011. 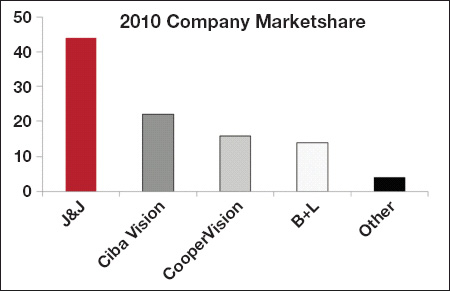 Baird & Co. also continues to conduct market surveys of practitioners' attitudes, beliefs, and practices relative to what they are seeing and doing in contact lens practice. When the Baird & Co. research group asked practitioners about product “innovativeness,” Ciba led in practitioners' perceived innovation, followed by J&J, CooperVision, and B+L, respectively. Correspondingly, practitioners were also asked about anticipated use of company products over the next 12 to 24 months; Ciba ranked first, followed by CooperVision, B+L, and J&J, respectively (Figure 2). In summary, Ciba appears to be enjoying the most momentum in the industry at the moment, although J&J continues to maintain the greatest marketshare by a significant margin.

Figure 2.Anticipated use of productsfor each company

Contact Lens Spectrum also conducts market research, whereby we ask our readers about their practice trends and patterns both generally and as they relate specifically to contact lens practice. Our questions cover a variety of topics including characteristics of the patient base of a practice, business and financial aspects of a practice, fitting and prescribing trends, and contact lens care solution trends. This year we had 488 respondents, although not every individual responded to every question, thus reducing our sample size for some questions. As I proceed ahead in discussing trends and observations about the contact lens field, I will draw on information provided through this market research, in addition to that acquired from the Baird and Co. research group, as mentioned previously.

Practice and Business Trends Most of our respondents were optometrists, followed by opticians/contact lens technicians, and ophthalmologists. Modes of practice varied, but the most common was those who are in solo private practice, followed by group private practice, and those who are associated with a retail corporation. In 2010, the typical practice saw an average of 116 patients per week (up eight patients per week on average compared to 2009 and 13 patients per week compared with 2008). The patient base of the typical practice was made of approximately 36 percent contact lens wearers (down 1 percent from 2009), and the average number of contact lens fittings and refittings in a typical week was about 27 (no change compared with 2009). Correspondingly, most respondents felt that about 34 percent of their gross profit and about 28 percent of their net profit was derived from the contact lens portion of their practices (both down 1 percent compared to 2009). 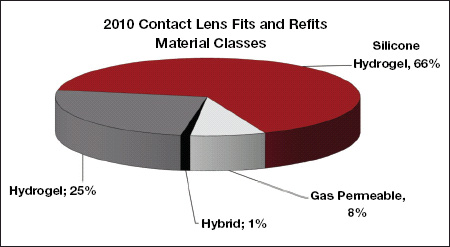 Figure 3. Distribution of material classes used in fittings and refittings.

As shown in Figure 4, most of the reported fits and refits are with soft spherical lenses (54 percent), followed by soft toric lenses (22 percent), soft multifocal lenses (11 percent), spherical GPs (6 percent), and multifocal and toric GPs (3 percent and 2 percent, respectively). Most of your patients are in full-time, daily wear soft lenses, and most are using monthly replacement (42 percent) schedules (Figure 5). This is an interesting trend compared to years past, whereby more patients were using two-week replacement lenses (e.g., 44 percent in two-week replacement in 2008) compared with monthly lenses. Likewise, data from the Baird & Co. research group also show this trend of an increase in daily and monthly lens prescribing, even when comparing their research data from Spring 2010 to Fall 2010. In their research, the Baird & Co. research group found that the top two reasons why practitioners are fitting more daily and monthly lenses included better patient compliance and healthier lens options, respectively. There were little changes in quarterly and annually replaced lens fittings and refittings when comparing 2010 with 2009 (Figure 5). 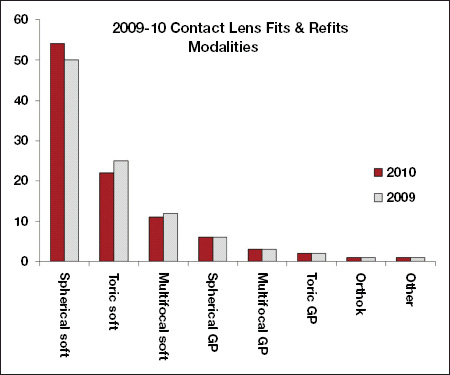 Figure 4. Distribution of lens modalities used in fittings and refittings. 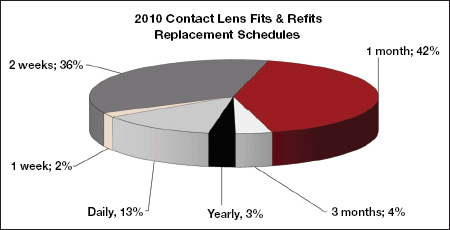 Figure 5. Distribution of replacement schedules used in fitting and refittings. 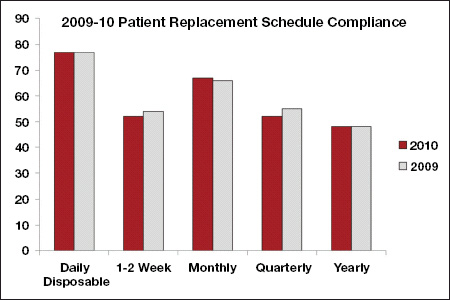 Relative to toric soft lenses, our estimates show a slight decrease in soft toric lens fitting in 2010 at approximately 22 percent of all lenses fitted (compared to 25 percent in 2009). Of soft toric lens fits, estimates suggest that about 65 percent of those in the United States are performed with a toric silicone hydrogel lens (Baird & Co. research group), which represents significant growth from last year. It is estimated that there will be continued silicone hydrogel penetration in the toric lens market, possibly up to nearly 80 percent over the next two years.

Daily disposable market share appeared to go up slightly in 2010 in terms of U.S. market share at about 13 percent (compared with 11 percent in 2009). When asked about anticipated use this coming year in our survey, 76 percent of respondents reported that they anticipate using daily disposables at a greater rate (the highest of all categories of practitioners' anticipated use in our survey). Obviously, this is different on a worldwide basis, with estimates suggesting that practitioners use daily disposables in approximately 34 percent of fits worldwide, with about 38 percent of fits on average in Europe to 54 percent in Asia (Baird & Co.).

Over the next year, most respondents thought that silicone hydrogels (either two-week or monthly), multifocals, and daily disposables would be increasing further in their practices, whereas all classes of traditional hydrogels would be decreasing further. Respondents felt that almost all categories of traditional hydrogels, extended/continuous wear, cosmetic lenses, orthokeratology, and GPs would all be staying the same or decreasing in their practices. 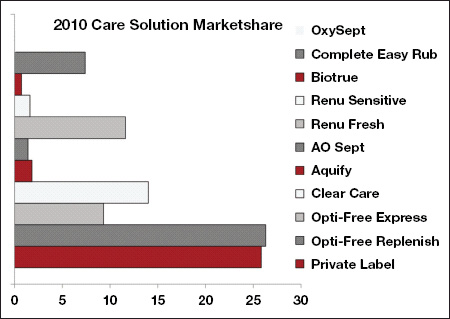 Our data show that you are also making lens care recommendations—94 percent of you are recommending specific brands of contact lens care systems to your contact lens patients. The largest factor in your selection was lens material/solution compatibility (66 percent), followed by the potential impact on comfort (26 percent), and other factors (8 percent), while cost played an insignificant role (<1 percent). Interestingly, most of you believe that the majority of your patients (69 percent of your patients in 2010 compared with 67 percent in 2009) are indeed compliant with their lens care instructions.

This is a big very year for Contact Lens Spectrum in that we are celebrating our 25th anniversary—the first issue published in January 1986. We are very proud of our heritage and reaching this milestone, and we appreciate all of your support along the way. We plan to celebrate this anniversary throughout the year in our regular columns and features, in addition to some special content we have planned specific to this anniversary. For this special content, we have some of the most respected clinicians and scientists helping us mark this milestone. In fact, in this issue, Drs. Joe Barr and Carla Mack, both emeritus editors of Contact Lens Spectrum, are kicking off this series of special articles that will run in several issues throughout this year.

Again, thank you to all our readership and supporters for a fabulous 2010. We are indeed excited and optimistic about 2011. CLS