This 53-year-old female presented to our office with a complaint of severe left eye pain that began the previous evening as she was removing her multifocal soft contact lenses. She thought that she had injured her eye with her fingernail. The patient was new to lens wear and had done very well in learning application and removal during her in-office training a few days earlier. She was not wearing her contact lenses at the time of her emergency visit. 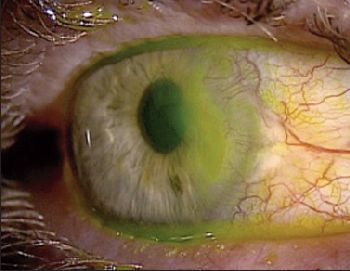 Her presenting acuities with spectacles were OD 20/20 and OS 20/30. The examination of right eye was unremarkable, but the left eye showed marked injection and epiphoria. The left lid was edematous, and upon elevation of the lid we noted the lesion in the superior aspect of the cornea. Careful evaluation with fluorescein showed loose epithelium that extended well beyond the margins of the abrasion. After instillation of 0.5% proparacaine, we used a Kimura spatula to remove the unattached tissue. We instilled a cycloplegic drop, a topical NSAID, and topical antibiotic before placing a silicone hydrogel bandage contact lens on the eye. Over the next few days, the patient rapidly improved and experienced no pain or discomfort. Due to the severity and nature of the injury, we kept the patient in a bandage lens for several weeks. At her last visit, we reviewed proper application and removal techniques and asked her to trim her fingernails on a regular basis.

Corneal abrasion is a common presentation to eyecare providers. It may result from extraneous sources such as a branch or flying object. Abrasions are typically very painful, but with proper management, they often resolve over time without permanent sequel. Fingernail injuries cause long-standing problems because they tend to be shearing injuries that literally tear the epithelium away from the basement membrane. Improper treatment of these injuries may result in recurrent corneal erosions. We need to understand the anatomy that firmly binds the epithelium to the underlying structures.

Stock et al (1992) used guinea pigs to evaluate regeneration of the adhesion complex and found that after keratectomy, hemidesmosomes regenerate fairly quickly and were seen 48 hours after the initial procedure. At some time later, the type VII collagen begins to form new anchoring filament. These findings would suggest that when we treat patients who have shearing injuries to the cornea, we should allow plenty of time for them to develop normal histological features (hemidesmisomes, anchoring filaments) that promote good corneal adherence. Reidy et al (2000) kept patients who had this sort of injury in bandage contact lenses for one month. In a review article of recurrent erosion, Das et al (2008) suggested that If the RCE patient wears a bandage contact lens without symptoms for three months, the lens can then be removed.

When conservative therapy such as bandage contact lenses proves ineffective, consider more aggressive treatments including microabrasion of the epithelial bed, stromal micropuncture, and excimer laser phototherapeutic keratectomy of the bed of the erosion.