While hyperopic corneal reshaping is not FDA-approved in the United States, worldwide the modality has enjoyed great success. Our work with it began in 2003 when we fitted a series of cat eyes with hyperopic CRT (Paragon Vision Sciences) lenses. The histology (Figure 1) demonstrates the fundamental principles of the procedure: a compression of the midperipheral epithelium at a chord of approximately 5.0mm and a thickening of the central epithelium over a chord of approximately 3.0mm. 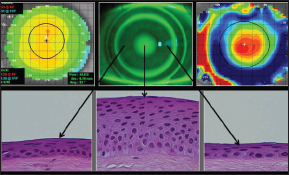 Clinical experience with hyperopic corneal reshaping has taught us that success requires three primary fitting goals: 1. a central clearance zone to create a reservoir for epithelial thickening over the central cornea, 2. a convex “knee” at a chord of 5.0mm to create a zone of epithelial compression, and 3. a “landing zone” in the periphery to center the lens.

Figure 2 shows the different tear film profiles of a myopic and a hyperopic corneal reshaping design. Figure 3 shows the tangential difference display map of a patient post-hyperopic corneal reshaping, showing thickening of the epithelium in the center of the cornea (orange/yellow), epithelial compression at a chord of 5.0mm (blue), thickening over the midperipheral reverse curve (red), and finally, peripheral epithelial compression in the area of the landing zone (blue). 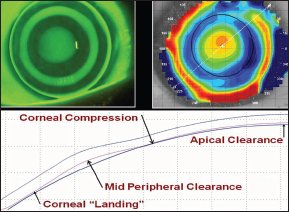 The technique for selecting the initial CRT diagnostic lens (Figure 4) is as follows. Calculate the radius of the central clearance curve (the base curve) by identifying the flat K (i.e., 42.00D). Add an additional 0.50D to the flat K (42.50D). Next, add the desired hyperopic correction (i.e., +2.00D), resulting in a central base curve radius of 44.50D/7.60mm. Calculate the Return Zone Depth (RZD) of the lens using the CRT myopia correcting slide rule with reference to flat K (42.00D) and the dioptric correction desired (+2.00D). In this case the slide rule suggested an RZD of 0.525, but when fitting the hyperopic design select a shallower (–0.50) RZD, in this case 0.475. The Landing Zone Angle (LZA) is identical to that suggested by the slide rule (i.e., 32 degrees). 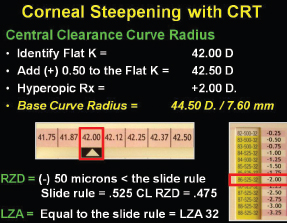 The convex “knee” is critical to achieving the desired treatment effect. If the post tangential topographical map fails to illustrate a “blue” ring of compression at a chord of 5.0mm, decrease the RZD an additional 25 microns to increase “knee” pressure. CLS