An upper eyelid inner margin (UEIM) epitheliopathy may be the cause that justifies these events (Korb et al, 2002). In 2007, reports from the International Dry Eye Workshop (DEWS) pointed out the need to identify the role of the UEIM and the epitheliopathy that the eyelid area may develop (DEWS Report, 2007). This epitheliopathy, also known as upper lid frictional epitheliopathy (ULFE) (Korb et al, 2010), is a syndrome initially described in contact lens wearers that has been proven to also occur in patients who have never worn contact lenses.

Korb et al (2002) concluded that 80 percent of contact lens wearers who report symptoms of dry eye within the first four hours of lens wear demonstrate upper lid margin staining (ULMS), against 13 percent of lens wearers who do not report dry eye symptoms. When the tear film is altered, those thousands of daily blinks (based on an average of 12 to 15 blinks per minute [Monster et al, 1978; Carney and Hill, 1982]) imply a UEIM sweeping over the contact lens surface which, without appropriate tear film humectation, initiates physical trauma and mechanical abrasion in the UEIM (Korb et al, 2002). A later study carried out by the same research group on the frequency of ULFE in subjects who have dry eye signs and symptoms showed that 88 percent of symptomatic patients exhibit ULFE with some degree of intensity. Furthermore, 16 percent of asymptomatic patients exhibit ULFE with ULMS, with the majority low in intensity, leading to the conclusion that ULMS is a diagnostic sign of dry eye pathology (Korb et al, 2010).

The primary reason for discomfort in a well-fitted lens wearer when the lens is in good condition is the friction between the upper lid margin and the lens surface between blinks (McMonnies, 2007). For this reason, several authors state that ULMS might be a very useful test for detecting dry eye at very early stages before symptoms manifest (Korb et al, 2005; Korb et al, 2010; McMonnies, 2007; Yan et al, 2008).

The UEIM is the area of the eyelid that is in contact with the ocular surface. It originates slightly behind the meibomian glands orifices, where the stratified squamous epithelium changes from keratinized to non-keratinized epithelium, and extends superiorly up to the subtarsal fold (Korb et al, 2005). The vertical extension from the UEIM covers approximately from the Maxwell line to an area where a change in the shape of the surface, near the subtarsal fold, is visible (Korb et al, 2005).

The aim of this study was to evaluate the change in UEIM staining and to assess its appearance as well as its relationship with symptoms of ocular dryness after using lubricating eye drops.

Seventeen healthy eyes from nine subjects (eight female, one male), who were not taking medication of any kind nor had any known allergies, with ages ranging from 16 to 46 years old (mean 31 years ± 6.8 years) and presented ULMS were evaluated. Two of those subjects were not contact lens wearers, three wore silicone hydrogel lenses, four were GP lens users, and one alternated between GP and silicone hydrogel lenses. All subjects provided informed consent after explanation of the procedures.

A protocol was designed to prospectively assess the effect of regular use of Blink Intensive Tears (Abbott Medical Optics [AMO]) for symptoms and signs of dry eye, with ULMS as the main endpoint. This protocol followed the tenets of the Declaration of Helsinki and was approved by the Ethical Review Board.

To evaluate ULMS, a drop of lissamine green was instilled onto the eye, with a second drop instilled after two minutes. One minute later, the eyelid was everted and pictures were taken using black light and 16x and 22x magnification on the slit lamp. The ULMS classification scale used was developed based on the percentage of area covered and its shape:

1. Coverage, percentage of area stained, considering 100 percent of the area from the Maxwell line (Figure 1) up to the area where the tissue texture changes (Figures 2, and 3). 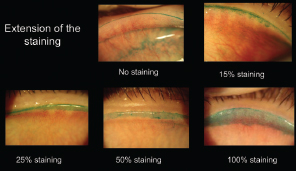 2. Regarding the shape of the stain, it has been observed that all stains adopt a pattern shape that can be categorized as one of the following:

• Feather-like pattern: Stains that start vertically from the Maxwell line with narrow brushstroke shape and variable length.
• Band pattern: This most common type of stain adopts a uniform band shape from the nasal to the temporal side of the inner eyelid margin. It often thickens at the center and then slightly thins towards the edges.
• Irregular pattern: Stains without any defined shape (Figure 4). 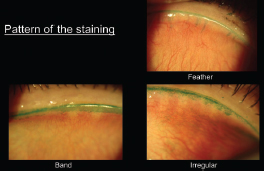 All symptomatic subjects experienced a subjective improvement in the level of dryness initially reported by the OSDI (average of 14.50 points) (Schiffman et al, 2000) (Figure 5). Out of the three asymptomatic subjects, two kept the same test value and the third reported a lower degree of dryness, changing from an initial value of 18.75 to a value of 12.50. In 16 out of 17 eyes, the TBUT value improved 2.22 seconds on average (Figure 6). Regarding corneal staining, at the baseline visit four eyes exhibited grade 3 corneal staining and two eyes exhibited grade 2 corneal staining. After two months of using the lubricating eye drops, the more severe cases decreased to grade 1 and the staining disappeared in the rest.

In all of the 17 eyes assessed, the ULMS pattern changed its shape and/or coverage with the use of Blink Intensive Tears.

We noticed that band-like and irregular patterns responded to extended hydration with artificial tears in a different manner from how feather-like patterns did. Band-like and irregular stains reduced in 76 percent of eyes. Two eyes showed a reduction in the stain coverage of 85 percent and 50 percent, respectively, although in the majority of eyes the affected area decreased an average of 15 percent (Figure 7). 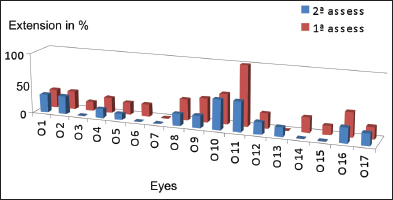 Feather-like stains presented in five of the eyes (Figure 8). Coverage was assessed based on the length of the stroke stained; two out of four eyes presenting a feather-like pattern had an initial coverage of 100 percent and the other exhibited 60-percent coverage, which reduced completely until it disappeared. Only one of the eyes did not demonstrate any change in the coverage of the stain despite the use of the artificial tear drops. 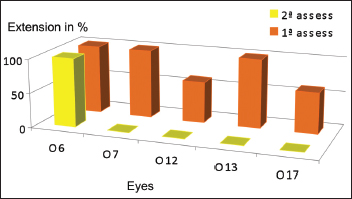 Lid wiper epitheliopathy (LWE), or what we define as ULMS, has been reported by Korb et al (2010) to occur both with and without contact lens wear and also correlates with symptoms of dry eye in contact lens wearers. The frequency for LWE in a group of non-contact lens wearers who had dry eye symptoms but no conventional ocular signs was 76 percent (Korb et al, 2010).

The most probable cause of compromise to the epithelial cells of the upper lid margin is the friction between the inner lid and the ocular surfaces that increases when there is a lack of lubrication (Korb et al, 2002).

In summary, ULMS is a useful diagnostic test among the battery of tests that help determine the diagnosis of dry eye. Its presence opens up the likelihood of future symptoms, so it should be treated in advance. Assessment of ULMS in contact lens wearers may provide useful information in those cases in which the patient reports discomfort even though dry eye symptoms are not experienced.

In our preliminary study, we evaluated subjects who already exhibited ULMS at their baseline visit and assessed ULMS reduction after increasing the lubrication of the ocular surface with a commercially available eye drop (Blink Intensive Tears). Future studies with a higher number of subjects are needed to obtain statistically significant results.

ULMS, as well as other signs of dry eye such as corneal staining and TBUT, seem to respond positively to frequent ocular hydration with Blink Intensive Tears drops. After two months of use, 82 percent of subjects in our study showed improvement in ULMS, and all symptomatic subjects reported subjective improvement of ocular dryness. CLS

This study was funded by an unrestricted educational grant from Abbott Medical Optics.

For references, please visit www.clspectrum.com/references.asp and click on document #195.