Market and survey data suggest 2011 was a year of rebuilding for many.

As 2011 draws to a close and we begin 2012, it's time to pause and reflect on the past to see where we've been and to glean insights into where we may be headed in the field of contact lenses. Some years are more challenging than others, and 2011 was likely one of rebuilding for many as the economy tries desperately to leave the recession that began in 2009 as far behind as possible. Likewise, 2012 is a presidential election year, and its impact in terms of potential changes in economic policy and agenda are still very much uncertain.

According to Robert W. Baird & Co. Inc., Milwaukee, Wis. (Jeff Johnson, OD, CFA, Director, Senior Research Analyst), the contact lens market remained healthy in 2011, with U.S. sales growing 5 percent rough the third quarter, and worldwide sales up 4 percent after excluding the impact of fluctuations in foreign exchange rates. As noted in our prior annual reports, there was a marked slowdown in the phthalmic market starting in the fourth quarter of 2008, followed by slow but continued growth through 2011. The worldwide contact lens market is now estimated at $6.8billion, while the U.S. market is estimated at $2.6 billion. These numbers include the impact of currency, however, so it isn't necessarily accurate to say the market grew ~11 percent (from $6.1 billion, as we reported last year). Therefore, excluding the impact of currency fluctuations, Baird estimates the worldwide contact lens market grew ~4.5 percent on a trailing 12-month basis off of ~5 percent market growth in 2010. Further, Baird believes the outlook for the contact lens industry remains healthy, with growth of 3 percent to 5 percent expected in the United States and worldwide in 2012.

According to Baird, market share in the United States for each of the large soft contact lens manufacturers was fairly stable through the first three quarters of 2011 (Figure 1). Johnson & Johnson (J&J) Vision are maintained about a 42 percent share (down a point or two from 2010), and Ciba Vision's (Ciba) share was up to the mid-20 percent range (~25 percent). CooperVision gained share in the United States in 011, at approximately 21 percent, while Bausch + Lomb (B+L) also continued to cede domestic market share, falling toroughly 11 percent compared with a 13 percent to 14 percent share in 2009 and 2010

When practitioners were asked in November 2011 about product “innovation,” Baird found that CooperVision scored the highest at 3.73 on a scale of 1 to 5 (1 = Not innovative at all and 5 = Highly innovative)followed closely by Ciba (3.67) and J&J Vision Care (3.59), with B+L lagging a bit further ehind at 2.82. According to Baird (and as reported in prior years), Ciba was associated with the highest perceived roduct innovation in 2010, while J&J Vision Care was associated with the highest perceived product innovation in 2009 and 2008. 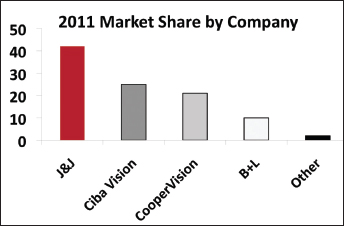 Contact Lens Spectrum also conducts market research, whereby we ask our readers about trends and patterns in their practices in general and as they relate specifically to contact lens practice. Our questions cover a variety of topics, including characteristics of practice's patient base, the business and financial aspects of a practice, fitting and prescribing trends and care solution trends. This year, 493 respondents accessed the survey link, 358 completed the entire survey, and 135 answered a portion of the survey. As we continue to discuss trends and observations about the contact lens field, we will draw on information provided through this market research in addition to that acquired by Robert W. Baird & Co. Inc., as mentioned previously.

Baird also continues to conduct market surveys of practitioners' attitudes, beliefs and practices related to contact lens practice. Reviewing monthly business trends at the practice level, it appears there was a strong summer with a somewhat softer fall in terms of contact lens sales in 2011. When asked if they had noticed any changes in contact lens practice trends, practitioners indicated the demand for specialty and non-specialty silicone hydrogel lenses and daily disposables continued to grow. Compared with data from 2010, the demand for daily disposables was associated with the largest relative increase.

Figure 2. Distribution of material classes used in fittings and refittings.

As shown in Figure 3, most of the reported fits and refits were with soft spherical lenses (54 percent) and in full-time daily wear (63 percent), followed by soft torics (23 percent), soft multifocals (11 percent), spherical GPs (5 percent) and multifocal GPs (2 percent). Most patients are wearing full-time daily wear soft lenses, and most are using monthly replacement schedules (46 percent) as shown in Figure 4 (versus 42 percent in 2010). As we first noted in 2010, this is an interesting trend compared with prior years, when more patients were using two-week replacement lenses. Two-week replacement was down to 33 percent this year, again losing share of the replacement schedule market. There were few changes in fits and refits for quarterly and annually replaced lenses as shown in Figure 4.

Figure 3. Distribution of lens modalities used in fittings and refittings.

Figure 4. Distribution of replacement schedules used in fittings and refittings.

Most practitioners indicated that their patients who wear GP lenses replace them yearly (43 percent), followed by every two years (33 percent) and every three years (16 percent).

Compliance with contact lens wear and care has been one of the most discussed topics in the field during the last few years. Although several studies show convergence on several descriptive characteristics about compliance with various behaviors, we still lack a fundamental understanding of how compliancerelates to the clinical picture, including vision, comfort and ocular health-related outcomes. Hopefully, manufacturers will soon take a step forward on this issue with research in the area. 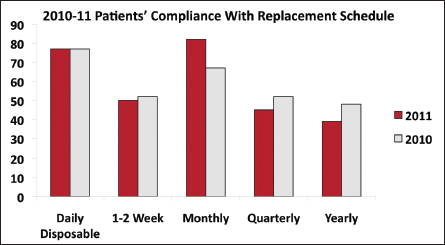 Figure 5. Practitioners' perceptions of their patients' compliance with lenses of various replacement schedules.

On a similar note, we've come to learn more about other steps in the lens wear and care regimen in terms of compliance. Overall, practitioners believe that 70 percent of their patients comply with lens care instructions in general. For example, they reported that approximately 75 percent of their contact lens patients wash their hands before handling their lenses, but only 60 percent rub their lenses as indicated, and 64 percent rinse their lenses as indicated.

Most practitioners who responded to our survey reported they recommended chemical care systems (77 percent), followed by hydrogen peroxide-based systems 23 percent). Although hydrogen peroxide use had been increasing over the last few years, these estimates are similar to those we reported for 2010. As shown in Figure 6 (data from A.C. Nielsen), total hydrogen peroxide use was about 16 percent to 17 percent. Also shown in Figure 6, Opti-Free Replenish, private-label care solutions and Clear Care hold the largest market share of all soft lens care products. Our data show that 89 percent of practitioners are recommending specific brands of contact lens care systems to their patients. We noted, however, that care solution recommendations by eyecare practitioners appear to be declining somewhat this year as compared with prior years (92 percent in 2009 and 94 percent in 2010). Among those who do recommenda care system, the most important factor for the recommendation is lens material/solution compatibility (34 percent), followed by the potential impact on comfort (25 percent), disinfectant efficacy (23 percent), cleaning efficacy (12 percent) and convenience (6 percent). Cost played an insignificant role (0 percent) in care solution recommendations. 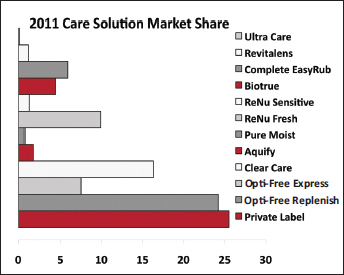 Once again, we are optimistic about the upcoming year in contact lenses. In 2012, we expect new offerings in silicone hydrogel technologies as well as expansions in existing lens offerings, such as daily disposables. With the introduction of several new lens care systems over the last two years, however, it seems unlikely that we will see any new offerings inlens care products.

As noted in this month's “Editor's Perspective,” we believe the Tear Film and Ocular Surface Society's comprehensive report on meibomian gland dysfunction (MGD) is the most significant event in contact lenses in 2011. Although this report was not entirely focused on contact lenses, a significant portion of it highlighted the many challenges to contact lens wear, of which we are all very well aware, including symptoms and evaporative disease classification. The report also provides insights into the mechanisms of MGD and the binding of lipids on lens materials, which may help explain in part what happens in contact lens-related dry eye.

This year as in years past, we had hoped to see more clarity in the regulatory aspects of contact lenses and care solutions in 2011, but new guidance and guidelines have been slow to emerge.

In 2011, Contact Lens Spectrum celebrated its 25th anniversary. We are proud of our heritage, and we have appreciated all of your support along the way. Again, thank you to all of our readers and supporters for a fabulous 2011. We are, indeed, excited and optimistic about contact lenses in 2012. CLS