Understanding the shape of the anterior segment can help improve success with lens design and fitting.

Today, information related to the indications and fitting of scleral contact lenses dominate both educational symposia and contact lens journals alike. GP lens designs that are fitted larger than the cornea are increasingly becoming the lens of first choice for many specialty contact lens practitioners around the world. This begs the question, what do we know about the peripheral cornea, limbus, and scleral shape? Considering that these new-generation designs are fit well past the cornea, we must ask: do we really understand the shape of the anterior segment?

Since the late 1800s, the keratometer has been routinely used to assess eye shape (Gutmark and Guyton, 2010). This instrument typically measures the central 3mm of the cornea and provides us with perspective on corneal shape including corneal astigmatism (Khurana, 2003; Bennett and Rabbetts, 1991). However, the keratometer fails to describe the shape of the eye inside or outside of the single placido ring (Hansen, 2003), making this instrument of little value when determining the shape and depth of the anterior segment and for designing any contact lens with a diameter greater than 12mm (DeNaeyer and Breece, 2009; Schornack and Patel, 2010).

Video keratography (corneal topography) has proven to be an effective tool in fitting corneal contact lenses that lie within the limbal boundaries (Kojima and Caroline, 2009; Sindt et al, 2011; Sindt, 2008; DeNaeyer, 2010). The instrument can calculate the relative elevation of the anterior surface, which allows us to model and predict the fluorescein patterns of corneal GP lenses (Figure 1). However, the capture area of contemporary topographers is often limited to a chord of approximately 8mm to 10mm; therefore, in the design and fitting of larger-diameter lenses, we cannot calculate the sagittal depth of the anterior segment that includes the cornea, limbus, and scleral shape (Kojima and Caroline, 2009; Casser et al, 1997; Wang and Wang, 2006).

Figure 1: Corneal topographers can determine the shape and elevation of the eye (left image). The GP lens fitting module in the contact lens software can then be used to design and manipulate the lens fit in the theoretical environment (middle image). This improves the efficiency of trial or custom lens determination of corneal GP lenses (right image).

Today, inherent limitations of traditional keratometry and placido-based corneal topography techniques (Fujimoto, 1995) in measuring sagittal depth have been overcome with the introduction of anterior segment optical coherence tomography (OCT). Figure 2 illustrates a keratoconic eye imaged with the Visante OCT (Carl Zeiss Meditec). The instrument lets us view the eye in cross sections 360 degrees around the clock (van der Worp, 2010). Caliper tools can be placed on the images to measure distance, depth, and angles throughout the entire anterior segment of the eye. Practitioners can accurately assess the contribution of the cornea, limbus, and sclera to the sagittal depth of the anterior segment for the optimum fitting of scleral lenses.

Figure 2 shows the OCT image of an eye that has advanced keratoconus. The thinning of the corneal tissue is visible near the corneal apex. The anterior segment anatomy can be viewed and its structures measured with the calipers within the instrument:

Figure 2. The OCT image of an eye with advanced keratoconus.

These angles were derived by drawing 10mm and 15mm rulers parallel to the plane of iris using the nasal and temporal sulcus as points of reference. Then the angle was calculated from the plane of the 15mm chord along the eye’s surface to the 10mm chord.

One of the most obvious early observations made from OCT was that the peripheral cornea, limbus, and sclera show very little if any curvature in many eyes (van der Worp, 2010). The anatomy of the eye in these regions forms a straight line and is therefore best geometrically described as a tangent angle rather than a radius curve.

Figure 3 shows an example of the tangent shape of the eye’s surface from a diameter of approximately 10mm to 20mm (red dashed line). This straight line shape runs from the peripheral cornea into the sclera without a discernible limbal junction in a high percentage of patients in most if not all axes of the eye. 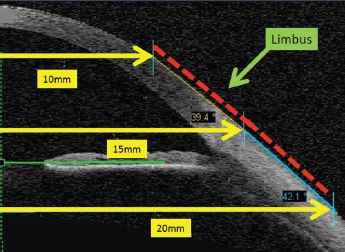 Figure 3. An example of the tangent shape of the eye’s surface from a diameter of approximately 10mm to 20mm (red dashed line).

From a scleral lens design perspective, OCT has demonstrated that the central and midperipheral cornea are curved and, therefore, the corneal surface is accurately described in terms of radii of curvature. However, beyond a chord of 10.0mm, the peripheral cornea, limbus and sclera generally form a straight line and therefore are more appropriately described as a tangent angle (van der Worp, 2010; Caroline and André, 2010). In most eyes evaluated there is not a discernible junction between the cornea and sclera. Instead, the limbal area is simply part of the tangent continuum between the 10.0mm and 20.0mm chord.

With the knowledge that the peripheral cornea, limbus, and sclera cannot be described as radii of curvature, we embarked on a study to measure these anatomical features by the tangent angles that form between the chords of 10.0mm to 15.0mm and 15.0mm to 20.0mm.

The team at Pacific University imaged 96 eyes on 48 normal subjects with the Visante OCT (van der Worp, 2010). In primary position, the instrument allows measurement of the angle that forms between the 10.0mm to 15.0mm chord. To obtain the angle measurements at the 15.0mm to 20.0mm chord (the scleral angle), the instrument was decentered from the subjects’ line-of-sight. Peripheral angle measurements were taken in the eight principle meridians of the eye (Figure 4).

The results showed that the angles formed at the 10mm to 15mm chord were nearly symmetrical, with 1.7 degrees of variability between the means at the eight principle meridians (van der Worp, 2010; Caroline and André, 2010; Figure 4). However, the angles that formed at the 15mm to 20mm chord showed more asymmetry, with a variability of 6.6 degrees. This would suggest that symmetrical scleral lenses (non-toric) with bearing points or landing zones of 15.0mm or less should perform adequately in a high percentage of eyes. It also suggests that bearing points closer to the 20.0mm chord may more often require non-symmetric (toric or quadrant-specific) scleral designs. The increasing peripheral asymmetry noted in this study may be related to the insertion of the extra-ocular muscles, which we hypothesize may have an impact on the peripheral sclera shape. Therefore, the closer you get to the extra-ocular muscles, the greater the sclera asymmetry. 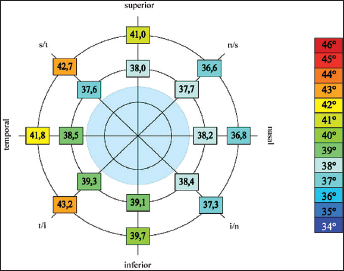 Figure 4. Study results have been plotted with the average angles on the eight principle meridians. 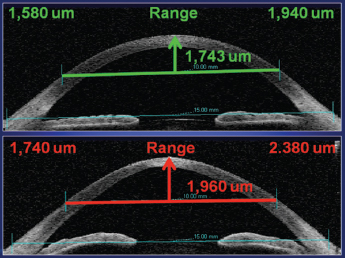 Figure 5. Comparison of the sagittal height differences between normal and keratoconic eyes from the corneal apex to a 10.0mm chord. The mean sagittal difference is a significant 217μm. 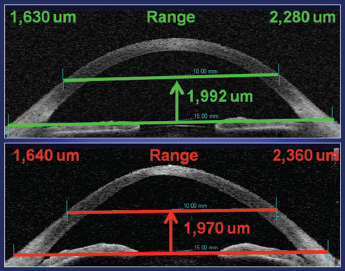 This initial research led to a series of studies at Pacific University to assess the anatomical shapes of 55 normal eyes and 55 eyes with moderate-to-advanced keratoconus (average apical radius 63.00D/5.35mm) (Achong-Coan et al, 2012; Copilevitz, et al, 2012). Table 1 summarizes the results of these studies.

The data indicate that:

• The sagittal height of the peripheral cornea, limbus, and sclera (between a chord of 10mm to 15mm) in normal and keratoconic eyes is essentially identical—approximately 2,000 microns.

• The cornea/scleral angle (between a chord of 10mm to 15mm) is essentially identical between normal and keratoconic eyes—approximately 38 degrees.

• The differences in sagittal height between normal and keratoconic eyes takes place over the 10mm central chord. 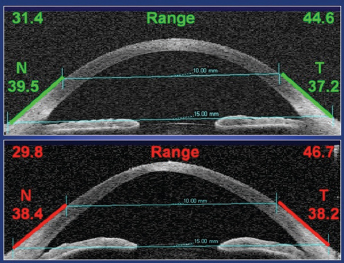 Figure 7. Comparison of the corneal/scleral angle that forms between the 10mm to 15.0mm chord. The means for both the normal and keratoconic eyes are similar (approximately 38 degrees). 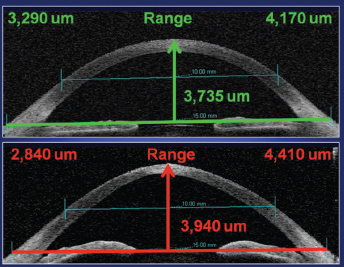 Figure 8. Comparison of the measured sagittal depth from a chord of 15mm to the apex of the cornea. The mean corneal depth differential between the normal and keratoconic eyes is a significant 205μm.

Therefore, if a practitioner does not have access to an optical coherence tomographer, a corneal topographer that can provide both sagittal height at a chord of 10mm and the peripheral angle at 10mm can be a good starting point for calculating the sagittal depth of scleral lenses. In this case, the Medmont E300 Corneal Topographer was employed to calculate both sagittal height and peripheral tangent angle (Figure 9).

With the corneal depth and angle determined by the corneal topographer, a simple calculator was developed to compute the sagittal depth of the initial lens required for any chord diameter. This method makes a number of assumptions about the global shape of the eye, which could introduce a degree of error on abnormally shaped scleras. However, in a high percentage of patients it is designed to improve the accuracy and efficiency of scleral GP lens selection and may be applied to specialty soft lens fitting. As a method for scleral lens selection, it is imperative to know the diameter (or chord) of bearing of the lens to determine the proper depth of the trial or custom lens required. For soft lenses, the total diameter should be sufficient, although this formula has not been tested for this application at the time of publishing.

Anterior segment OCT has started us down the path of enlightenment to a better appreciation of the corneal and scleral shape so we can more accurately predict scleral lens parameters. The technology has suggested that the peripheral cornea, limbus, and anterior sclera are primarily tangent in shape and reasonably rotationally symmetrical closer to the limbus, but more asymmetrical closer to the extra ocular muscles. We also have learned that the limbal and anterior scleral shape is similar between normal and diseased eyes and that the major difference between these groups is in the depth of the cornea. Lastly, if a topographer can measure the peripheral corneal angle and the sagittal depth of the central cornea, this can help predict the required depth and shape of an initial scleral lens. 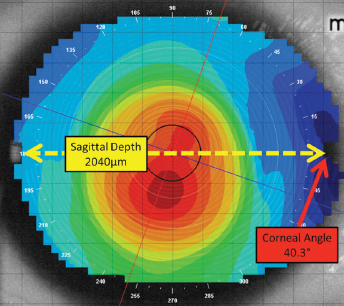 Figure 9. The calculated sagittal depth of this keratoconic eye is 2040μm, and the corneal/scleral angle is 40.3 degrees at a chord diameter of 10mm (Medmont E300 Corneal Topographer). 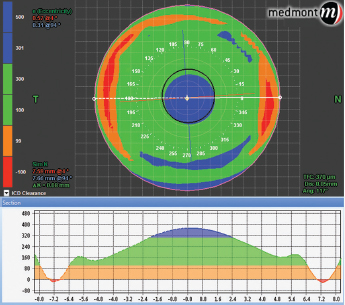 Figure 10. The predicted tear film profile of the ICD 16.5mm scleral lens (Paragon Vision Sciences) in the Medmont E300 Corneal Topographer. The posterior tear film thickness between the lens and cornea is color coded to quantify the vaulting or bearing. Fluid thickness in Blue (>300μm), Green (100μm to 300μm), and Orange (0μm to 100μm), and areas of conjunctival compression in Red (<0.0μm).

This analysis could be further applied to corneal topographers that enable scleral lens fitting from a contact lens module. This could aid in the selection of the initial diagnostic lens by simulating areas of bearing or touch and quantifying the micron thickness of vaulting throughout the back surface. Modifications can then be made in the theoretical environment before the actual lens is applied (Figure 10).

Determining the similarities and differences of what has been successful and what we learn today regarding anterior segment shape will help us succeed in prescribing large-diameter lenses. This mathematical fitting method could possibly evolve the way we fit lenses whose diameters fall beyond the limbus. CLS

For references, please visit www.clspectrum.com/references.asp and click on document #209.