Many patients here in Brazil underwent radial keratotomy (RK) surgery to correct myopia and astigmatism during the early age of refractive surgery. At that time, some surgeons would make radial incisions and sometimes a flat incision in the paracentral cornea. Most cases resulted in irregularities and sometimes iatrogenic ectasia due to the aggressiveness of the procedure. Such patients do not have good visual acuity and suffer from serious visual disturbances, especially at night because the pupil becomes larger in low light and causes more severe visual aberrations. 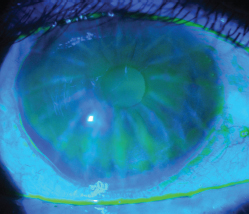 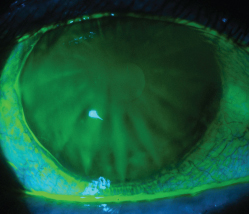 Eyeglasses do not work for these patients. Even if they have just a small amount of myopia after the procedure, the irregular astigmatism is critical and cannot be corrected. In addition, these cases are difficult to fit with contact lenses. Soft lenses do not work because they cannot correct the irregular astigmatism. GP lenses are a better option, but the irregularities induced by the radial incisions create depressions and elevations on the anterior cornea that in some cases make it almost impossible to achieve a stable fit.

This scenario changed when the new generation of GP scleral lenses became available. Now it is possible to fit a very irregular post-surgical cornea without touching the cornea or the limbus.

This article discusses how one very complex case was resolved with a scleral lens fit that not only provided the patient with better visual acuity and comfort, but also improved the physiology of his optical surface and acted as a therapeutic treatment to improve his corneal condition. 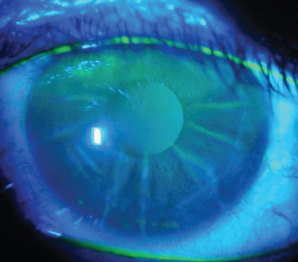 The patient was a 52-year-old male engineer. He underwent bilateral RK surgery in 1994 with good initial results, but after two years his vision deteriorated. He presented with an induced, iatrogenic corneal ectasia OD and a very irregular surface OS. He complained of blurred vision, discomfort, and red eyes during lens wear. Best-corrected visual acuity (BCVA) with his current contact lenses was 20/100 OD and 20/30 OS. 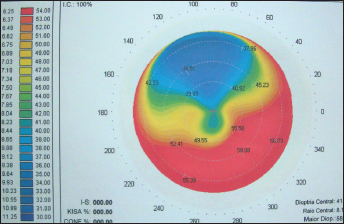 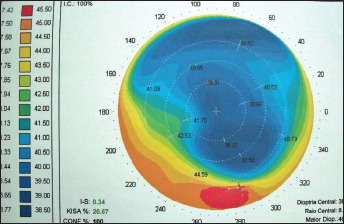 It is interesting to note that at the time that this patient underwent the RK surgery, the procedure protocol dictated a maximum of eight radial incisions. However, some surgeons had begun adding four or even eight more incisions, for a total of 16 cuts, as was the case with this patient. At the time there were differing opinions regarding how many incisions could be made in each case, with more conservative surgeons having reservations about increasing the number of RK incisions.

These procedures represented the very first attempt to change the shape of the cornea through refractive surgery. Today’s refractive surgery techniques are less aggressive, but they still can result in serious complications. It is important to know how to manage such patients, as post-surgical patients may visit you at any time.

Contact Lens Examination and Fit Evaluation The patient presented at the initial visit in March 2011 wearing a pair of GP lenses called Planex. Slit lamp examination revealed compromised corneas with severe staining along the incision lines and around the cornea at the limbus. These findings resulted from the fit of the GP lenses, which were touching the anterior elevations of the cornea, demonstrated no movement, and also did not allow enough lacrimal exchange.

Figure 1 shows the patient’s cornea OD with a small amount of fluorescein instilled following lens removal. Slit lamp examination revealed staining of the radial incisions, which are still visible even after 17 years. It is also easy to observe that the limbus is compromised by a circular line of staining surrounding the cornea. Figure 1a shows the staining using only a cobalt blue filter, while in Figure 1b we also used a Fluorescein Enhancement Device, which is a combination of camera settings and a special yellow lens used with the slit lamp.

The other eye was not as severely affected, but it also presented some staining as is visible in Figure 2.

We then instructed the patient to suspend contact lens wear and to apply Epitezan (Allergan, available in Brazil) 12/12 hs./day and lubricants 4/4 hs./day to allow the corneal epithelium to heal. The patient was scheduled to return for re-examination and evaluation with new contact lens designs after one week of the prescribed treatment. 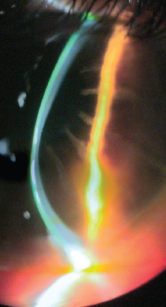 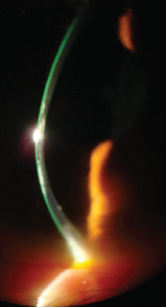 At the one-week visit, we initiated the refitting process. The cornea was more clear and calm, which facilitated our evaluation of new lens designs. Corneal topography confirmed inferior elevation OD (Figure 3a).

We wanted to fit a large aspheric GP lens that could vault over the cornea, so we initially tried an Ultracone (Ultralentes) lens (Soper Modified design) OD due to the corneal ectasia and an Ultraflat (Ultralentes) lens (a large progressive aspheric GP lens) OS. Both lenses presented a better fitting relationship compared to the patient’s previous contact lenses, but we were not satisfied with the result. The inferior paracentral, iatrogenic keratoectasia made it difficult to establish a good fitting relationship OD, and several anterior elevations along the incisions (Figure 3b) prevented optimal lacrimal layer distribution beneath the lens OS.

The next step was to fit a scleral lens design. Although we prefer to fit sclerals with diameters of 18.5mm and above, we found that this patient had a nasal pinguecula OD and a nasal lymphatic cyst OS. We then decided to fit smaller, semi-scleral lenses to avoid interaction of the lens edges with these scleral conditions. 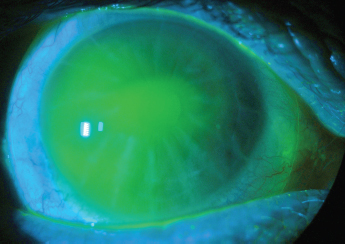 Figure 5a. Front view of the fluorescein pattern OD. 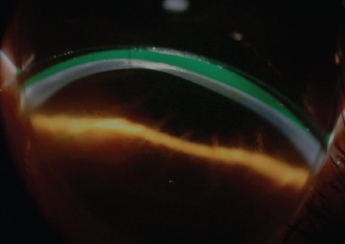 We decided to test and fit different semi-scleral lens designs based upon the corneal topography and on our assessment of the cornea through the slit lamp view as shown in Figure 4. It is apparent that the right eye has an inferior anterior and posterior elevation indicating a corneal ectasia. The superior area of the cornea had a flatter and less irregular surface, so we decided to fit an Ultracone SSB, or Semi-Scleral Bastos Ultracone (Ultralentes), with a 15.8mm diameter that allowed us to vault the corneal ectasia and also the entire cornea without bubble formation. This lens also allowed lacrimal exchange. The Ultracone SSB features two base curves and a haptic curve. The lens parameters we selected included base curve radii of 56.00D × 45.00D, −19.00D power, 15.8mm overall diameter (OAD), and 10.0mm optic zone (OZ). Figure 5 shows the fluorescein pattern in a front view and the slit lamp view at an angle of 45 degrees with the image turned to the right.

In the left eye we opted for an Ultraflat SSB, or Semi-Scleral Bastos UF (Ultralentes) design that utilizes a progressive aspheric single base curve and a haptic curve. Lens parameters included a base curve radius of 45.00D, −3.50D power, and 15.0mm OAD. The lens gently contoured the entire cornea from limbus to limbus. Figure 6 shows the fluorescein pattern in a front view and the slit lamp view at an angle of 45 degrees with the image turned to the right. 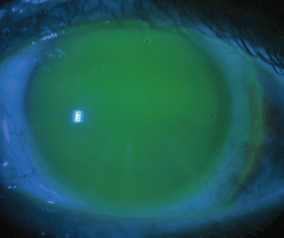 Figure 6a. Front view of the fluorescein pattern OS. 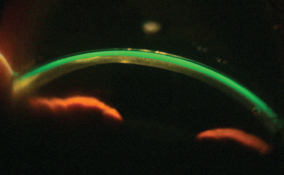 Scleral and Conjunctival Assessment Correctly assessing the haptic of the contact lens over the sclera is essential to ensure a good fitting relationship and to avoid imprinting of the conjunctiva. In this case we also had the previously mentioned nasal pinguecula OD and lymphatic cyst at the nasal position OS that prevented us from fitting scleral lenses of greater diameter. Figure 7 shows that careful scleral assessment was needed to avoid complications resulting from these two delicate aspects of the fitting. The reduced lens diameter helped to preserve the sclera at these points.

After one year of wearing these lenses, the patient developed no complications. The scleral lenses also seemed to act as a therapeutic treatment, as the ocular surface was much healthier at the one-year visit than it had been at the initial fitting. In addition, BCVA OD surprisingly improved from 20/100 at the initial fitting to 20/30 after one year of lens wear. The OS BCVA is 20/20, and the patient is very satisfied with both the lens comfort and vision. He mentioned that he also noticed an improvement in his binocular vision with the new lenses, which was really a surprise as we had no idea that his vision could improve so much after one year. 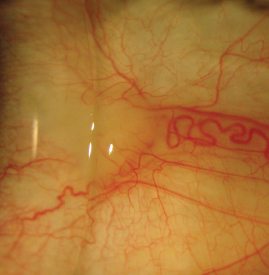 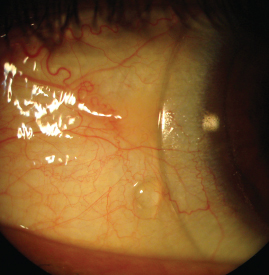 At the one-year visit, we noticed that the patient’s cornea and limbus OD had a much better appearance; the eye was calm and clear. We believe that this happened as a result of the therapeutic benefits of the scleral lens fitting with lacrimal exchange. We concluded that the fitting of a well-designed semi-scleral GP contact lens filled with a preservative-free saline solution created a healthy environment behind the lens, which in turn helped the damaged cornea and limbus to heal. It also helped to protect the RK incisions from abrasions as a result of blinking, and it improved both visual acuity and quality.

This case demonstrates that for patients who develop irregular corneal surfaces after refractive surgery and who cannot be corrected with glasses, soft contact lenses, or GP corneal lenses, modern semi-scleral and scleral contact lens designs can help in improving their wearing comfort and vision. CLS

For references, please visit www.clspectrum.com/references.asp and click on document #208.