Beyond the Fovea: Peripheral Defocus and Human Myopia

Orthokeratology and soft bifocal contact lenses are garnering a great deal of attention in the realm of myopia control. A randomized clinical trial published last year found that orthokeratology slowed eye growth by 43 percent in myopic children (Cho and Cheung, 2012). The treatment effect continued to accumulate over the two-year study, which is important because previous spectacle studies utilizing bifocals and progressive addition lenses (PALs) have reported an initial slowing of myopia progression during the first year of wear but limited additional accumulation of treatment effect in subsequent years.

Though no long-term clinical trial results are yet available, early reports from studies utilizing center-distance soft bifocal contact lenses that induce myopic defocus (either by increasing in plus power toward the periphery or using concentric zones) have also reported success at slowing eye growth (Anstice and Phillips, 2011; Walline et al, 2011).

Although much work is now being done based on the hypothesis that peripheral myopic defocus slows myopia progression, is there human evidence to support this hypothesized mechanism?

Is there human evidence to support this hypothesized mechanism?

Peripheral Refraction of the Unaided Eye

Based on a study published in the early 1970s believed to suggest that eyes that have hyperopic relative peripheral refraction (RPR) were more likely to later become myopic (Hoogerheide et al, 1971), several longitudinal studies have measured RPR of the unaided eye.

Studies have generally found that uncorrected myopic eyes and emmetropic eyes that are about to become myopic exhibit hyperopic RPR in the horizontal field of the eye (Atchison et al, 2006; Mutti et al, 2007).

Despite this common finding, longitudinal studies have failed to detect a meaningful association between the amount of uncorrected RPR and either the onset or progression of myopia in children (Mutti et al, 2011; Sng et al, 2011). This has led to the assertion that changes in RPR and eye shape as the eye grows longer may be the result of myopia progression as opposed to the cause.

However, RPR does not describe the actual defocus experienced by the peripheral retina when wearing correction.

Therefore, it is necessary to determine peripheral defocus when the eye is corrected to best evaluate whether an association exists between peripheral retinal defocus and myopia progression.

The mechanism yielding the clinically small but statistically significant PAL treatment effect reported by several clinical trials is not completely understood. Bifocal spectacles have traditionally been hypothesized to work by decreasing accommodative lag; however, studies evaluating the association between accommodative lag and myopia progression have had variable results.

Several studies in children have not found an association between accommodative lag and myopia progression (Berntsen et al, 2011 and 2012; Weizhong et al, 2008), while both positive and negative associations have been reported in adults (Allen and O’Leary, 2006; Rosenfield et al, 2002). Recently published results from the Study of Theories about Myopia Progression (STAMP) have provided evidence for an alternate explanation of the PAL treatment effect.

Myopic children in STAMP were randomly assigned to wear either SVLs or PALs, and STAMP found that PALs slowed myopia progression by 0.18D over a one-year period (Berntsen et al, 2012).

Superior myopic retinal defocus in STAMP was associated with slower foveal myopia progression. Although only half of the children wore PALs, a large number of children wearing SVLs also experienced myopic superior defocus because, unlike the horizontal meridian of the eye that consistently has relative peripheral hyperopia, the vertical meridian of the uncorrected myopic eye often has relative peripheral myopia. 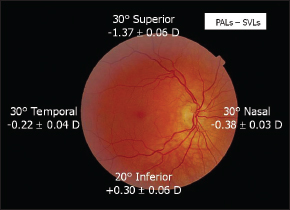 Children who had myopic superior defocus while wearing their spectacles progressed -0.38D (n = 67), while children who had superior hyperopic defocus progressed -0.65D (n = 17), a difference in progression of 0.27D (Berntsen et al, 2013). When allowed to compete in the same statistical model, superior defocus was more predictive of foveal myopia progression than was the type of spectacles that the child wore (SVLs or PALs). 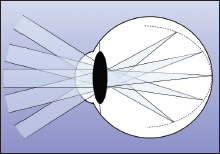 Figure 2: Optical defocus profile that provides a clear foveal image and myopic defocus on the peripheral retina, which is hypothesized to slow myopia progression.

The association found between superior myopic defocus and slower central myopia progression in children wearing PALs and SVLs provides an alternate explanation for the previously reported PAL treatment effect. Because PALs create a large myopic change in peripheral defocus in only one retinal quadrant, finding this association in humans supports further investigation of contact lens designs that create significant amounts of myopic defocus 360 degrees around the peripheral retina to attempt to maximize the reduction in myopia progression (Figure 2).

Future longitudinal studies measuring the actual defocus created by optical treatments will be important to better understand this association in the human eye and to potentially optimize the defocus profile created by treatments attempting to slow myopia progression. CLS

For references, please visit www.clspectrum.com/references.asp and click on document #216.

Dr. Berntsen is an assistant professor at the University of Houston College of Optometry. He has received research funding from the Johnson & Johnson Vision Care Institute and Alcon.