Like the other two one-bottle H2O2 lens care systems on the U.S. market (Clear Care from Alcon and Sauflon One-Step from Sauflon), PeroxiClear contains microfiltered 3% hydrogen peroxide, which provides excellent cleaning and disinfection. Also similarly, the neutralization of the hydrogen peroxide is achieved with a platinum catalytic disc that is firmly attached to the bottom of the case’s lens holder. Because the solution that remains after neutralization is nonpreserved (saline), a maximum of seven days of soaking is allowed before the lenses would need to be re-disinfected (Gromacki, 2012).

Another new feature is the lens case (Figure 1). It contains a two-tone color system, with white for the right eye and teal/green for the left. The case is also designed such that a contact lens is placed onto the part of the lens basket that swings open, rather than onto the central core. 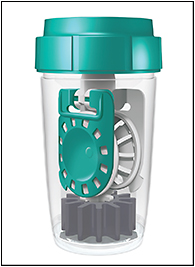 In addition, the neutralization process takes only four hours with PeroxiClear compared to the six hours required for other peroxide-based systems. B+L says that the PeroxiClear formulation provides a proprietary mechanism to delay the neutralization of hydrogen peroxide for a short time initially, delivering higher peroxide exposure for disinfection over this short period of time. This initial delay is then followed by a robust and quicker neutralization.

With H2O2 care system use trending up over the last few years (Nichols, 2014), it’s great to have another option to recommend to our patients. CLS

For references, please visit www.clspectrum.com/references.asp and click on document #222.

Dr. Gromacki is a diplomate in the American Academy of Optometry’s Section on Cornea, Contact Lenses and Refractive Technologies and practices in Chevy Chase, Md.