Global trends are reflected in hugely populous countries such as India, where the prevalence of astigmatism is 6.93% (95% confidence interval [CI]: 4.9% to 8.97%) in south Indians aged ≥15 years and 37.6% in adults aged ≥40 years (Dandona et al, 1999). Astigmatism accounted for the second major clinical diagnosis (18%) in a six-year retrospective study on the prescribing patterns of contact lenses (Sanker et al, 2013). Toric lenses were prescribed for 19.5% of the patients, out of which 1% were in conventional toric lens materials. In a survey conducted among 227 contact lens practitioners in India, toric lenses represented 24% of total soft lens designs.

Within this category, the frequent replacement lens modality was preferred in 95% of cases (Thite et al, 2013). Toric lenses represented 26% of conventional hydrogel lenses in a survey of contact lens practitioners in seven countries (Efron et al, 2011).

Though the prescribing of frequent replacement toric lenses is on the rise, there still exists a group of patients who have higher refractive errors that such lenses cannot correct (Cole et al, 2013). Frequent replacement toric lenses are restricted to cylindrical powers of –2.75DC to –3.50DC in hydrogel materials and up to –2.25DC in silicone hydrogel materials. The range of cylindrical axes is also restricted, even more so with higher spherical or cylindrical powers. The maximum spherical power availability is –9.00DS to +6.00DS.

Being in a tertiary eyecare center, we need to provide contact lenses to patients who have higher spherical and cylindrical refractive errors. Due to the limited availability of frequent replacement toric soft lenses in higher powers and the greater preference for soft lenses, custom-made hydrogel toric lenses were customized and manufactured.

We analyzed retrospective data of subjects prescribed with conventional toric lenses from the period of January 2012 to December 2012 in our tertiary eyecare center. These lenses were custom-made (polyHEMA, 38.6% water content, back-surface toric, scribe marks at 6 o’clock). Keratometric values and spectacle prescription were provided to a laboratory located abroad; there were no laboratories available locally that could manufacture custom-made soft toric lenses. Lenses were dispensed if they provided optimal fit, exhibited no rotation or less than 5º rotation, and provided stable vision. The rest of the anterior and posterior segment examination was normal. The data collected include patient demographics, previous correction modality, prescribed toric conventional lens parameters, and best-corrected visual acuity (BCVA) with spectacles and lenses.

To determine the percentage of soft toric lenses dispensed at the center, we retrieved from the hospital medical record system the total number of eyes fitted with soft contact lenses from January 2012 to December 2012 (excluding multifocals, cosmetic tinted, and bandage lenses). The study was in adherence to the tenets of the World Medical Association’s Declaration of Helsinki and was approved by the institutional review board. 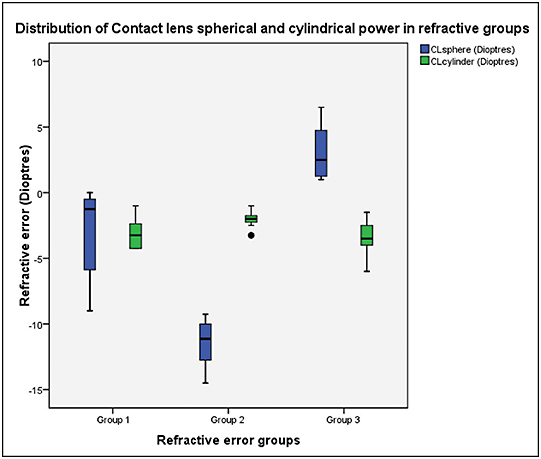 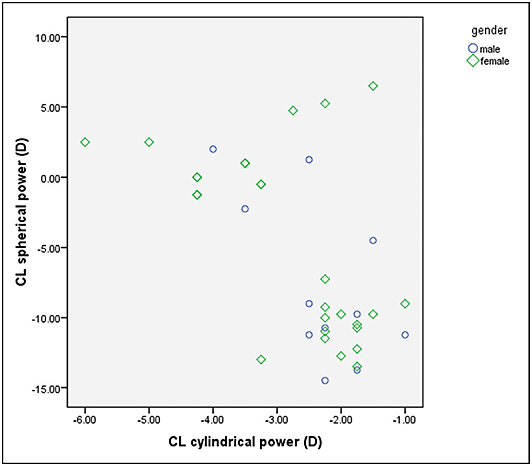 Figure 2. Distribution of contact lens spherical versus cylindrical error in males and females. 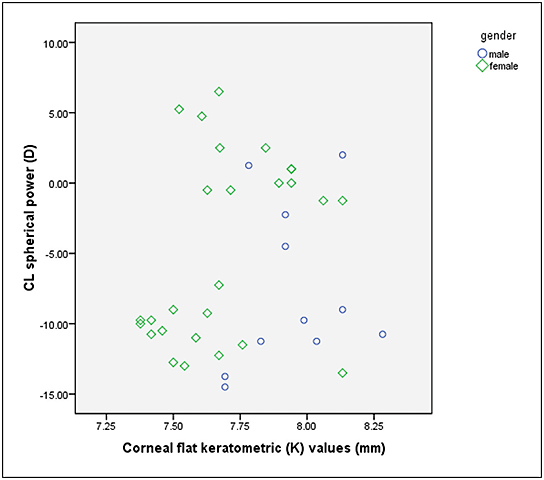 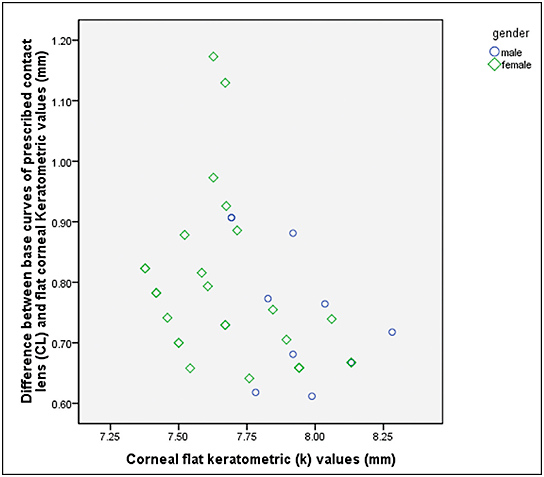 Age The subjects in this study were young as shown by Sanker et al (2013) and Thite et al (2013), but younger than that of studies done in developed countries (Efron et al, 2010; Woods et al, 2007; Morgan et al, 2006). This could be due to the non-availability of presbyopic toric contact lens options and the reduced penetration of multifocal lenses in the Indian market (Sanker et al, 2013; Thite et al, 2013).

Gender Previous literature indicates that contact lenses are prescribed more frequently among females than among males, and the same is reflected in our study (Morgan et al, Jan. 2013; Efron et al, 2011; Morgan et al 2009; Sanker et al, 2013; and others. Full list available at www.clspectrum.com/references.asp.). Being that the number of females was greater compared to males in this study, all the three refractive groups showed a female preponderance for this. Similar to our study, females were observed to have steeper corneas compared to males in studies by Douthwaite et al (2002) and Goto et al (2001).

Refractive Error In our study, refractive cylinders of –1.00DS to –3.00DS were corrected with conventional toric lenses in group 2; the spherical power of these lenses were <–9.00DS, which was beyond the range of available toric lenses. Cylindrical error of <–3.00DS were prescribed conventional toric lenses in groups 1 and 3 for the same reason. Four subjects in group 1 opted for these lenses despite their refractive error being available in the frequent replacement category. The reasons were: preference for the same brand of lenses in both eyes (the refractive error of the other eye being unavailable in the frequent replacement category), and non-availability of daily disposable toric lenses at axes except 90° and 180° (subject preferring flexible wear).

Cylindrical Axes There were more subjects with horizontal cylindrical axes than other axes (Table 2). The fact that with-the-rule astigmatism is prevalent more in younger patients is well known (Goto et al, 2001; Scott et al, 2007; Young et al, 2011). Group 3 had fewer subjects. It has also been proven that hyperopia is less common compared to myopia in this population (Dandona et al, 1999) and that astigmatism of 0.75D or greater is almost double in myopes compared with hyperopes (Young et al, 2011).

It was observed in our study that female corneas of steeper curvature were more common in group 2. Carney et al (1997) stated that eyes with higher levels of myopia had steeper central corneal curvatures, and that corneas tended to flatten less rapidly in the periphery with increasing myopia. Douthwaite et al (2002) and Rajan et al (2013) theorized that the amount of asphericity, or the rate of flattening of the corneal surface, also plays a role in determining the sagittal height of an eye’s anterior chamber and that variations in corneal eccentricity may be more influential on contact lens fit compared to corneal radius, even though the corneal diameter has the greatest impact of all of the variables influencing sagittal depth. Empirically fitted toric lenses were solely based on central corneal curvature and refractive error in this study.

Contact Lens Diameter The majority of prescribed contact lenses had diameters of 14mm to 14.2mm. This falls within the range of marketed toric lenses. A diameter increase (>14.5mm) would require a flatter base curve for non-alteration of fit. In this study, contact lens diameters ranged from 14mm to 14.5mm, even for <–3.00DC.

The percentage of our sample could be less due to the fact that most astigmats whose refractive error is beyond the range of marketed toric lenses opted for spectacle correction of astigmatism paired with a spherical lens correction. They may also have preferred a frequent replacement modality than conventional toric lenses. This suggestion is solely based on unpublished data from our clinical profile study.

Though conventional toric lenses are still successfully prescribed, options for the least frequently replaced lenses have to be analyzed for better corneal physiology after long-term wear. It remains to be seen whether the Indian market of toric lenses would improve to accommodate this group of patients who have yet to take advantage of improved materials and designs in toric contact lenses. CLS

For references, please visit www.clspectrum.com/references.asp and click on document #222.