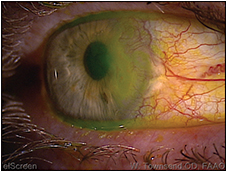 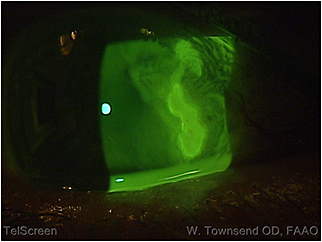 The lesion that appears in these photos is a delle, more commonly known as dellen, which is the term for multiple delle. Dellen has gradually gained acceptance as the moniker for a single lesion.1 Ernst Fuchs originally described and named dellen in 1911, noted their oval or “saucer-like” configuration, and observed their association with various forms of limbal edema or elevation including pingueculae, edema following extraocular muscle surgery, scleritis, and conjunctival hemorrhage.2 Dellen also have been associated with filtering blebs following trabeculectomy and with conjunctival dermolipoma.

Histologically, dellen are corneal excavations that develop secondary to a structural elevation that interferes with wetting of the corneal surface by the eyelids. They indicate some degree of chronic localized drying and disruption of the tear film. Dellen are usually shallow, but in some cases may extend to a depth of one-half the corneal thickness.

Dellen are typically, but not exclusively, located at or near the limbus. Ng described a central dellen in the cornea of an asymptomatic, 12-year-old Chinese female who wore overnight lenses for orthokeratology. After several years of successful wear, she developed a central corneal epitheliopathy described as a dellen. The author attributed this condition to midperipheral steepening of corneal curvature secondary to the reverse geometry lens designs used for orthokeratology. The lesion resolved after discontinuation of the lens.3

Dellen is often associated with extraocular muscle surgery; Fresina and Campos evaluated 655 consecutive patients who underwent surgery on the recti muscles for strabismus. They reported a 16% incidence of dellen in re-operated (multiple surgeries) eyes on medial rectus recession, and a 19% incidence of medial rectus recession using transposition technique. Only 4% of eyes that underwent lateral rectus recession developed dellen. They concluded that medial rectus procedures, especially those involving multiple procedures or transposition, had a higher frequency of dellen formation. In all cases, treatment with topical antibiotics, lubrication, and patching at bedtime resulted in resolution of the dellen.4

In cases in which these therapies are not successful, bandage contact lenses are a viable alternative. Kymionas et al reported the case of a 58-year-old male who underwent pterygia surgery and subsequently developed a persistent dellen. After 12 days of therapy with lubrication and artificial tears, the lesion had not improved. The extent of postoperative edema precluded the use of a standard bandage contact lens, so the authors fitted the patient with an 18mm T74/85 (David Thomas Contact Lenses - Menicon) extended wear/bandage contact lens. Within four days, the dellen had regressed and the bandage contact lens was removed without further sequelae.5

In the case of our patient, application of a bandage contact lens (Air Optix Night & Day Aqua [Alcon] plano) resulted in clearing of the delle. It is always possible for dellen to recur in the event of exacerbating factors such as extremely dry weather or use of medications that promote ocular dryness.