What Is Lid Wiper Epitheliopathy?

Epidemiology, associated conditions, and how to grade/assess this condition.

Lid wiper epitheliopathy (LWE) is a clinical condition observed as vital staining of the upper and lower lid margin regions that are in contact with the globe or a contact lens. It is believed to result from an increase in friction between the palpebral lid and the opposing bulbar conjunctiva, cornea, or contact lens (Korb et al, 2002; Korb et al, 2005).

Indirect evidence suggests that in a healthy eye, the tear film, glycocalyx of the cornea, and the conjunctival mucus (which is secreted mainly by the goblet cells in the lid margin region and the bulbar conjunctiva) reduce friction and prevent damage during blinking (Corfield et al, 1997; Ehlers, 1965; Knop N et al, 2012). However, conditions such as a thin or unstable tear film (Korb et al, 2010), decreased or altered mucins (Berry et al, 2008), contact lens wear (Korb et al, 2002; Best et al, 2013), and incomplete blinking (with a consequent drying of the exposed area)(McMonnies, 2007) increase the friction between the lid margin conjunctiva and the ocular surface or contact lens during blinking.

Although the cause of LWE is not known, it is postulated that inadequate lubrication results in frictional damage and inflammation of the marginal conjunctiva of the lid wiper region, resulting in an epitheliopathy that is clinically observed as lid margin staining (Korb et al, 2005; Korb et al, 2010).

The anatomical area of the lid wiper region in the upper lid is the palpebral marginal conjunctiva that is in contact with the globe. This extends from the crest of the sharp posterior (inner) lid border to the subtarsal fold superiorly and from the medial upper punctum to the lateral canthus horizontally (Figure 2) (Korb et al, 2002). Previously, Marx’s line, which is visualized as a thin strip at the crest of the posterior lid border separating the keratinized cutaneous epithelium from the non-keratinized conjunctival epithelium (Figure 1), was thought to represent the wiping surface, but this finding has been disputed (Korb and Blackie, 2010). 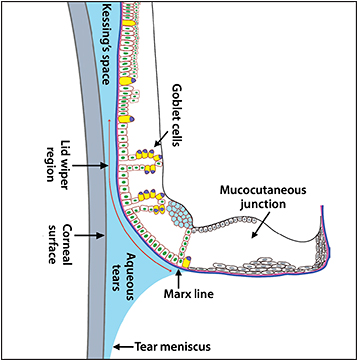 As shown in Figure 2, the conjunctiva of the lid wiper region consists mainly of cuboidal cells interspersed with goblet cells. It starts at the inner lid border crest, which transitions from keratinized squamous epithelium to cuboidal cells and occasionally columnar cells. This initial portion is elevated due to multiple cell layers (typically eight to 12), and the thickness gradually decreases toward the subtarsal fold over a distance of 0.3mm to 1.5mm (Knop E et al, 2011). The width of the wiper region is about 1mm (Knop E et al, 2012), but it is wider in the nasal and temporal regions compared to the center of the eyelid (Knop E et al, 2011).

The conjunctiva of this region also contains goblet cells that are present either singly or in clusters located in the superficial layers and also in the deeper layers of the epithelium along epithelial crypts that are connected to the surface (Knop N et al, 2012). These goblet cells secrete soluble mucins onto the lid wiper surface.

Jalbert et al (2012) used impression cytology to study the superficial layer histology of the lid wiper region. Despite the fact that there were no cell morphology differences between healthy soft contact lens wearers and non-lens wearers, the number of goblet cells were reduced in some subjects who had LWE.

Immuno-histochemistry of these samples showed three keratinization-related proteins (filaggrin, TGase1, and cytokeratin 1/10), which indicated the possibility that some superficial cells in the lid margin region may be in the early stages of keratinization.

LWE is observed in normal or mildly symptomatic subjects but is more commonly associated with dry eye disease and with symptoms of dryness in both non-lens and lens wearers (Korb et al, 2002; Korb et al, 2005; Berry et al, 2008; Golebiowski et al, 2012; and others. Full list available at www.clspectrum.com/references.). Specific patient-related factors associated with the observation of LWE include dry eye, exposure keratopathy, decreased production of mucins, incomplete blinking, and age (Korb et al, 2010; Berry et al, 2008; McMonnies, 2007; Pult et al, 2011). The effect of age on the prevalence of LWE is not clear; Pult et al (2011) reported a positive correlation between age and upper LWE, while Shiraishi et al (2014) reported a higher prevalence of both upper and lower LWE in younger (<39 years) as compared to older (>40 years) individuals.

The effect of the environment on the development of LWE in contact lens wearers was characterized by Jones et al (2013). Subjects exposed to decreased humidity and increased air flow in a controlled environment developed LWE in both the upper and lower lids after three hours of lens wear. In lens wearers, it is hypothesized that lens-related factors—such as non-wetting lenses and decreased lubricity—may contribute to the etiology of LWE (McMonnies, 2007; Efron et al, 2013).

The importance of LWE was recently discussed by the TFOS International Workshop on Contact Lens Discomfort, which concluded that “LWE may be one of the few clinical signs truly associated with dryness” (Efron et al, 2013). The data available from a few studies indicate that the clinical sign of LWE may be useful in predicting contact lens-induced dry eye (Korb et al, 2002; Pult et al, 2008).

Grading and Assessment of LWE

The severity of LWE was also estimated by measuring the region of staining through image analysis (Varikooty et al, 2013). The results indicated that image metrics—such as the stained area, convexity, and thickness of vertical extent of staining—were significantly associated with clinically graded LWE (Spearman’s rho all at least 0.61, all p<0.05) (Figure 3) (Varikooty et al, 2013). Table 1 shows the widely used 0 to 3 method of grading LWE (Korb et al, 2005).

Figure 3. Image metrics significantly associated with LWE.
COURTESY OF THE ASSOCIATION FOR RESEARCH IN VISION AND OPHTHALMOLOGY ©2013

Korb et al (2010) concluded that two dyes are required to record the range of LWE. Commonly, NaFl and LG (which has staining properties similar to RB) are employed for the evaluation. In addition, grading of LWE is done separately with each stain. The horizontal and sagittal grades recorded with each stain are averaged to obtain a score for each stain. A final score for the eye is obtained by averaging the NaFl and LG grades to determine the severity of LWE. The Marx’s line should be excluded from the LWE staining grade recorded (Korb et al, 2002). Table 2 shows the classification of LWE.

To date, many studies have highlighted LWE-associated staining with different concentrations, volumes, and methods of instilling the various stains. However, these staining procedures were not standardized, and the results are difficult to compare. Recently, an optimized method of lid wiper region staining using either liquid or strips of NaFl and LG has been proposed (Table 3) (Varikooty et al, 2012).

Visualization of LWE with NaFl (Figure 4) is enhanced by the Kodak Wratten 12 barrier yellow filter (transmitting above 495nm). Set the beam of the slit lamp to maximum width and 10mm height, and set the potentiometer to provide maximum illumination through the Wratten 47 or 47A cobalt blue exciter filter.

For observing LWE with LG (Figure 5), set the slit lamp beam to approximately 5mm width and 10mm height, and set the potentiometer to provide medium illumination with white light and the neutral density filter. 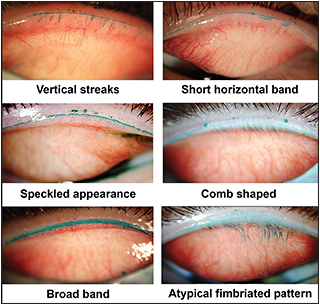 The time course for a decrease in staining following cessation of lens wear is not known. Additionally, LWE has been “treated” with both artificial tears and a variety of medications, with various degrees of resolution reported (Herman et al, 2005; Herman et al, 2006; Itakura et al, 2013; Zhang et al, 2011; and others).

In conclusion, LWE is a condition seen in both asymptomatic and symptomatic individuals. The higher prevalence in contact lens wearers may be due to a compromised tear film causing inadequate lubrication.

However, little remains known about its etiology, time for development, kinetics of repair, and long-term implications when present. Many studies remain to be conducted on LWE and how it may be minimized, but examining patients for its presence is of value. CLS

This article was prepared with financial support from Alcon.

To obtain references for this article, please visit http://www.clspectrum.com/references and click on document #240.