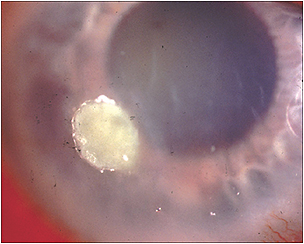 A 71-year-old male presented to the VA Medical Center Eye Clinic with a two-day history of pain and photophobia in his left eye. His right eye had been enucleated following trauma several years earlier. The patient initially denied any history of trauma, but later stated that he may have scratched his eye while playing with his dogs. His health history was positive for hypertension, which was treated with medications, and he denied any history of medication allergy.

His presenting corrected visual acuity in the left eye was 20/30. Biomicroscopy revealed a heavily coated prosthesis in the right eye. The left conjunctiva showed grade 3+ injection. A 2mm area of epithelial ulceration was located midway between the nasal limbus and central cornea. Evaluation of the anterior chamber revealed grade 1+ cells and flare. He had grade 2+ nuclear sclerosis.

Given the fact that our patient was monocular, had a possible history of vegetative trauma via his dogs’ paws, and had the intense injection, we performed corneal scrapings and plated them on blood agar and chocolate agar plates. We prescribed topical ciprofloxacin q4h and admitted him into the hospital because his home was 80 miles away and he had no driver.

The following day, his visual acuity was unchanged, but the lesion had increased in size by 30%, and there was now what appeared to be a small satellite lesion. The patient’s anterior chamber activity had worsened. These findings suggested the possibility of a fungal agent, so we plated scrapings onto Sabouraud’s agar, the preferred medium for suspected mycological keratitis. He continued his antibiotic drops.

On day three, the blood and chocolate agar plates showed minimal growth, but a substantial colony growing on the Sabouraud’s medium proved to be Aspergillis. We prescribed natamycin 5% ophthalmic suspension q1h. Within three days, the patient’s cornea was clear with a small residual scar. We instructed the patient to continue the natamycin q4h for a week.

This case demonstrates the value of utilizing the full scope of laboratory services to make a timely and accurate diagnosis. In this case of a monocular individual, we were fortunate to have access to a hospital laboratory to allow differentiation between a bacterial versus a fungal etiology.