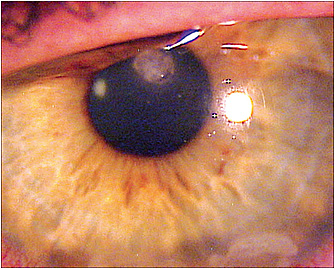 This 22-year-old male presented with a two-day history of unilateral pain, photophobia, and injection. Relevant history included unapproved overnight contact lens wear and recent ocular exposure to water from a horse trough splashed in his eyes. There was no recent history of direct trauma to either eye.

The appearance of his unaffected eye was unremarkable. Visual acuities were 20/20 in the unaffected eye and 20/50 in the affected eye. Evaluation of the affected eye revealed grade 3+ injection, multiple areas of ulceration with fluffy, irregular borders, and infiltrates. At high magnification, the lesions in the affected eye appeared to be a covered network of very small fibers (hyphae). Our tentative diagnosis was fungal keratitis with multiple lesions. We referred the patient for cultures and a corneal consult.

Fungal keratitis is an uncommon form of ocular infection that is often associated with ocular trauma, tropical climates, contact lens use, ocular surface disease, and prior ocular surgery.1 Worldwide, Aspergillus species are the most frequent isolate in fungal keratitis. An Indian study identified Aspergillus species as the most common isolate (27% to 64%), followed by Fusarium (6% to 32%), and Penicillium (2% to 29%).2

The incidence of fungal and bacterial ulcers is highly linked to geographic location. In the continental United States, bacteria are the dominant underlying causative agent in temperate climates, while fungi are the most common cause of corneal ulceration in southeastern regions of the country, where humidity is high and there is more soil moisture.2

Treatment of confirmed fungal keratitis may be challenging, and perforation is an unfortunate complication. Natamycin 5% ophthalmic suspension is the most commonly prescribed antifungal agent in the United States. Typical dosing is one drop in the affected eye every one to two hours for the first day, then six to eight times per day until the lesion is resolved.3 Voriconazole has also been used to successfully treat fungal keratitis; in a head-to-head study, it compared favorably to natamycin. However, at the end of the study, the natamycin group had a significantly higher percentage of healed corneas compared to patients treated with voriconazole (50/56, 89.2% versus 34/51, 66.6%; p = 0.005).4