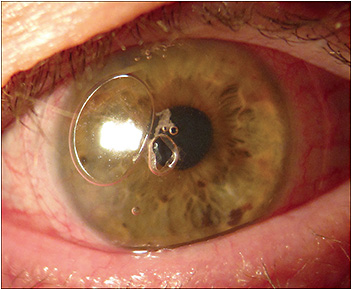 This photograph shows a hole though the center of a keratoconus patient’s right 16.5mm scleral lens (sag 5,128). The patient reported decreased vision with the lens and that solution was leaking out. At the first visit, it was undetermined as to what caused the hole, as the patient reported no history of trauma to the lens. A new lens was ordered, and the patient wore this lens without incident for one month until he returned again with a central hole. After taking a careful history and having significant discussion, it was determined that he had been using a generic hydrogen peroxide care system and that the case basket was different compared to that of the name brand system. The hypothesis was that the smaller basket was damaging the lens with closure. The patient switched back to the branded peroxide care system that was originally prescribed and has reported no breakage for eight months.

Dr. DeNaeyer practices at Arena Eye Surgeons in Columbus, OH. He is a shareholder of Precision Ocular Metrology LLC, has proprietary interest in Visionary Optics’ Europa and Elara Scleral Lenses, is a consultant to Visionary Optics, and has received lecture or authorship honoraria from Contamac. You can contact him at gdenaeyer@arenaeyesurgeons.com.